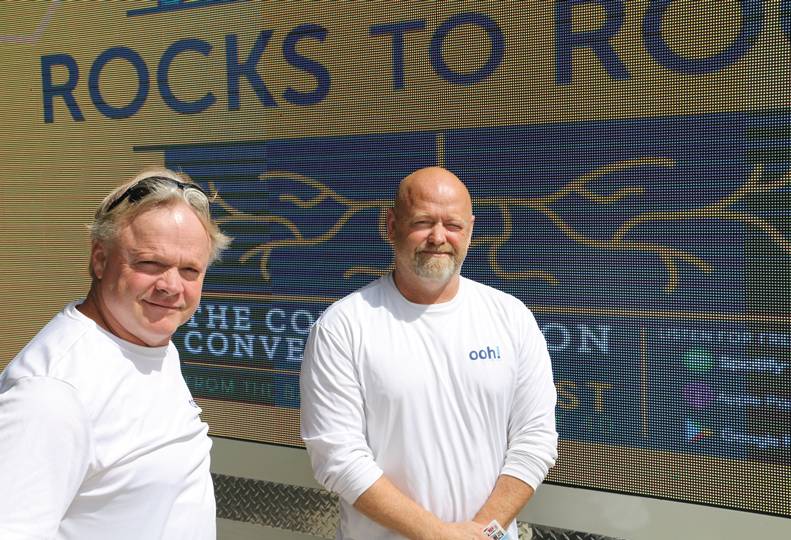 -Kevin Blocker
Brothers Mike and Ted Carroll have started Mobile Billboards with three trucks, two of which are operating in Spokane and one that’s in Portland.

A pair of brothers, both veterans in the fields of advertising and marketing, have teamed up to form Mobile Billboards Northwest Inc., a company that does just what its name implies.

The Carrolls to date have converted three utility trucks into rolling billboards for businesses to use for their advertising needs. Digital display ads appear on the sides and rear with a smaller video display on the front above the cab of each truck.

The larger displays on the sides of the truck measure 6 feet high by 13 feet wide, while the rear display measures 6 feet by 6 feet. The smaller display above the cab measures about 3 feet by 3 feet, Ted Carroll says.

Display screens on the side can be elevated for a raised display. Signage is controlled by a single computer in the back of the truck.

The resolution is so clear and audio so crisp, the trucks can be made available to customers for viewing events, specifically, “movie nights,” the 49-year-old Carroll says.

“I pulled it up in front of the house and watched Happy Gilmore with the kids the other night in the yard,” Carroll says.

The duo launched Mobile Billboards NW two weeks ago with a pair of trucks in Spokane and another in Portland. The goal is to begin placing trucks in other markets in the region over the next several months.

Rates can vary depending on length of agreement. Customers can rent hourly, daily, weekly, and monthly.

Ads cost $150 a day, with up to six ads rotating at any given time.

“Our plan is to be flexible – work with the clients’ budget and create the most impact for their message at an affordable rate,” he contends.

Carroll, who’s spent nearly all of his career in billboard and outdoor advertising, says rolling advertising came to him in recent years as he was “looking to do something different.”

The Carrolls are Spokane natives who graduated from Ferris High School. Ted Carroll went on to earn his undergraduate degree from Washington State University in advertising and communications with a minor in business.

He spent a decade of his career working with the Spokane office of national billboard company Lamar Advertising Co., which claims 90% of the billboard market in Spokane and Coeur d’Alene, according to that company’s website.

Older brother Mike Carroll, who is 58, has spent most of his professional career as a graphic designer. He worked with his brother at Lamar and has spent a good chunk of his career being self-employed, he says.

Regardless of the medium, Ted Carroll says a “simple message” is the key to effective advertising.

“Minimum content with great color is the key to being unique and impactful,” he says.