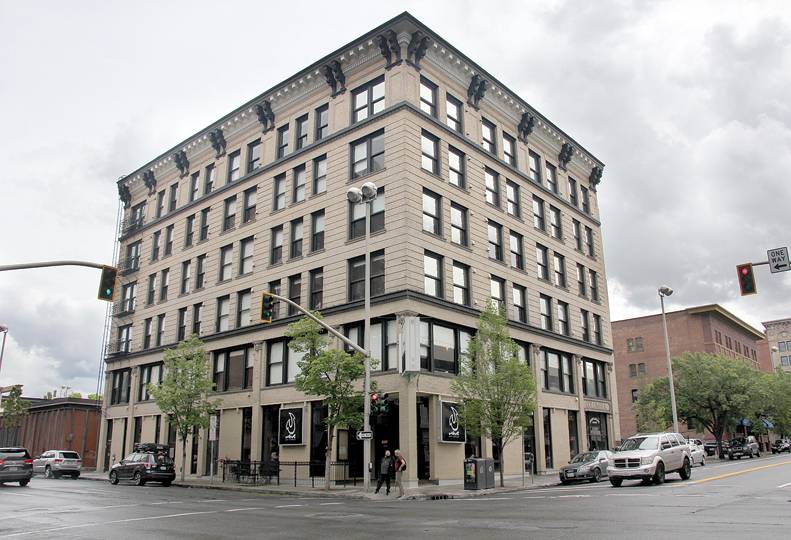 -—Erica Bullock
The historic James S. Black building is where the Marjorie Apartments are located.

Dave Black, co-owner of Black Enterprises, the entity that owns the building, says the financing came at the perfect time for the company—right before interest rates went up.

The Marjorie Apartments are located in the six-story, mixed-use building at 107 S. Howard, above ground-floor commercial space which includes Wave Sushi Island Grill.

“Commercial properties of any type, which means apartments, retail centers, industrial property, office parks and properties, and anything that is really investment real estate would potentially qualify,” Koston says. “Those are all potentially able to act as security for a long-term, institutional loan.”

Koston says the $4.8 million loan is a conservative loan amount for the value of the property.

The rate is fixed for 25 years, which is an unusually long period for a commercial loan, he explains.

Koston says there are few lending institutions that provide loans for that length of time because typical local lenders, such as banks and credit unions, aren’t set up for long-term commercial financing, especially for non-recourse financing, which means the loan is secured only by the real estate and not personally guaranteed by the borrower.

“It’s really cool that we fixed the rate and don’t have to worry about it for 25 years,” Black says.

The purpose of the loan is to refinance the debt already in place with a construction loan, Koston explains. The developer-borrower went to a local bank and borrowed funds to convert the property from a multitenant office building to a mixed-use multifamily property.

“Those funds are considered a construction loan and are typically not long-term solutions, but just available to complete the objectives, whether that’s ground-up development or repositioning, as in this case, but not meant to be long-term,” Koston says.

After the property was leased and considered stabilized with its current mix of occupants in the residential and retail spaces, the building became eligible for permanent financing, he explains.

Koston says he also has been involved in securing the financing for the M Apartments, at 612 W. Main, in the former Macy’s department store building; the Lincoln Center, at 1316 N. Lincoln, in Spokane; and One Lakeside, a 15-story mixed-use high-rise, in Coeur d’Alene.

The James S. Black building, where the Marjorie Apartments are located, was built as an office building in 1907, then called the Columbia Building, according to Spokane County Assessor’s Office records.

Black says it was later renamed the James S. Black Building after his late father, and the Marjorie Apartments are named in honor of his mother.

“I’m proud of our family for converting it from office to housing, which also helps the downtown housing stock,” Black says. “The housing market is better than the office market, and we’re able to make a nice asset out of that property. Plus, I own the Wave on the main floor.”

He says the new office space will occupy nearly 1,000 square feet, in a multitenant building at 218 Cedar, in Sandpoint, Idaho.

D’Agostino says Meridian has worked on a number of projects in North Idaho, including a 30,000-square-foot Kaniksu Community Health clinic and the 6,500-square foot Sandpoint Police Department headquarters.

One or two project managers will work out of the Sandpoint office, initially, he says.

“We noticed more opportunities coming our way in the last year or two, and it’s continuing,” D’Agostino says. “I see a lot of growth happening in that area. There are some great things coming up.”