Total volume of planned work is north of $412M 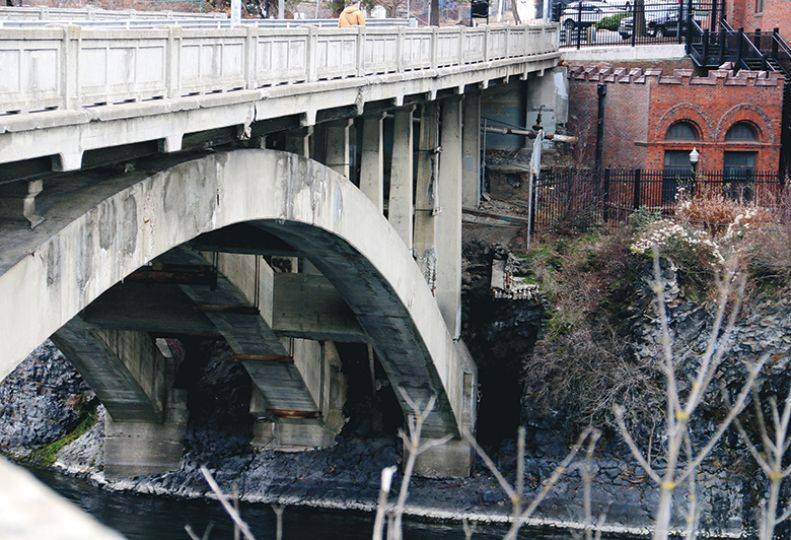 -KPFF Consulting Engineers
A $13.5 million renovation of the Post Street Bridge in downtown Spokane is expected to start this spring. In all, the city of Spokane has $227 million budgeted for capital projects.

More than $412 million in new public construction projects are slated across Spokane County this year, including work on the next phase of the North Spokane Corridor, the start of the Hamilton Street Corridor Enhancement Project, bridge improvements, and repaving work.

The city of Spokane has $227 million budgeted for capital projects, with $47 million slated for street investment this year, most of which will be spent on street improvement projects and the replacement of the 100-year-old Post Street bridge.

Marlene Feist, city spokeswoman and director of strategic development for the public works department, says a large portion of the capital project funds will be dedicated toward the next level of treatment at the Riverside Park Water Reclamation Facility and toward finishing work on combined sewer overflow tank replacement projects, which combined have over $80 million budgeted for 2019.

Design-build team KPFF Consulting Engineers and Kiewit Corp., based in Seattle and Omaha, Neb., respectively, were awarded the $13.5 million Post Street bridge project, which is still in the design phase. The city estimates construction will begin by late spring this year and will be completed in the summer of 2021.

The city of Spokane also will begin work on a $3 million North Spokane street preservation project that will rehabilitate Maple and Ash streets between Rowan Avenue on the south end of the project and Country Homes Boulevard on the north end. The project also will include rehabilitating Wellesley Avenue between Driscoll Boulevard on the west end of the project and Milton Street to the east. The project is currently in the design phase, and construction is scheduled to begin this summer.

The city hasn’t selected a contractor yet. Feist says the improvement projects will go out to bid in the first quarter of the year.

Feist says improvements to Five Mile Road will include construction of a roundabout at the Five Mile-Strong Road intersection, replacement of a water main, and creation of a new bike-and-pedestrian trail that will connect to Strong Road and Heath Avenue, west of Sky Prairie Park. The city is hoping for a summer start, says Feist, to avoid impacting the school calendar.

Construction time lines on the $77 million library bond, passed in November, are still up in the air, says Feist.

“They’re working on the design process right now for those projects, and there’s also collaborative projects,” says Feist. “I think three of the projects are in collaboration with the schools so that’s going to take a little more planning and effort, and the time line will, in part, be dictated by what else is happening around that project.”

As for the Spokane Public Schools’ construction bonds passed in November totaling $495 million, most projects will be in the design phase this year or next. However, Wilson Elementary, funded by the 2015 bond, and Lewis & Clark High School, funded in part by 2015 and 2018 bonds, are out for construction bids. Each has an estimated construction cost of $4.5 million.

ALSC Architects PS, of Spokane, is designing the project, which will be constructed under the design-bid-build process. Construction is expected to begin this July and be completed in September 2021.

The project is part of the district’s $129 million bond measure passed by voters in February.

The city of Spokane Valley has slated $20.6 million for capital projects this year, a quarter of which will be spent on street improvements.

The city will begin work on a $1.2 million Sullivan Road-Wellesley Avenue intersection improvement project. Plans show the city will either install traffic signals or construct a roundabout to help reduce traffic congestion.

The project is currently in the design phase, and no contractor has been selected.

Other Spokane Valley projects include sidewalk installations along Mission, Knox, and Wellesley avenues at a total cost of $1.5 million; a Barker Road reconstruction project between Euclid Avenue on the south end of the project and Garland Lane on the north end that will reconstruct and widen Barker to a three-lane road and install sewer infrastructure for $2.58 million; and $3.6 million for preservation projects across the city.

Spokane County has budgeted $27.1 million for its annual road construction program, which will include a $1.1 million reconstruction of Geiger Boulevard, an $8.25 million project named Bigelow Gulch Project 4, and various safety and intersection improvement projects.

According to Spokane County’s 2019-2024 Six-Year Transportation Improvement Program, Bigelow Gulch Project 4 will involve reconstructing and widening it to a four-lane road with 12-foot turn lanes as necessary from Old Argonne Road on the west end of the project to Forker Road on the east end. This is part of the county’s ongoing improvement project of Bigelow Gulch, a transportation corridor that connects the east side of the county to north Spokane.

Geiger will be reconstructed from Hayford Road on the west end of the project to Electric Avenue on the east end. The plans state Geiger Boulevard will be widened to three lanes, and a traffic signal will be installed at Hayford Road to mitigate traffic congestion near the Amazon.com Inc. fulfillment center currently under construction.

Project information listed on the Washington state Department of Transportation website states the next phase of the North Spokane Corridor will begin this summer, with the long-term temporary closure of Wellesley Avenue between Market and Freya streets to accommodate construction on that portion of the corridor including a new interchange at Wellesley that’s scheduled to open near the end of 2022. The $30.5 million project is currently in the preconstruction phase, and no contractor is listed.

North Spokane Corridor projects being wrapped up this year include the Carlisle Avenue to Wellesley Avenue stretch, realignment and relocation of BNSF Railway Co. tracks, construction of a bridge over Euclid Avenue, and construction of the Children of the Sun Trail and pedestrian bridges.

As previously reported in the Journal, WSDOT also plans to begin construction on the Interstate 90-state Route 902 Medical Lake interchange this year. The project will go out for bids in March.

Kevin Anderson, public facilities director for the city of Airway Heights, says WSDOT also will begin construction this summer on a $3.2 million roundabout at the state Route 2-Deer Heights Road intersection in Airway Heights. The project’s safety features will include a concrete center median to restrict turns.

“Eventually, we’re going to come in and landscape (the medians), so that will be a city project to try and make it nice, and have it be a concept that works well with what we want it to look like,” says Anderson. “Their main goal is to make it safe.”

The aim is to keep motorists from making turns in any direction that result in multiple accidents a year on the stretch between Hayford and Deer Heights roads in front of the Walmart Supercenter, he says.

Anderson says there are several other projects in the works planned for the near future, such as the extension of a pedestrian and bike trail that will run parallel to U.S. 2 from Fairchild Air Force Base all the way to Sunset Highway, in Spokane.