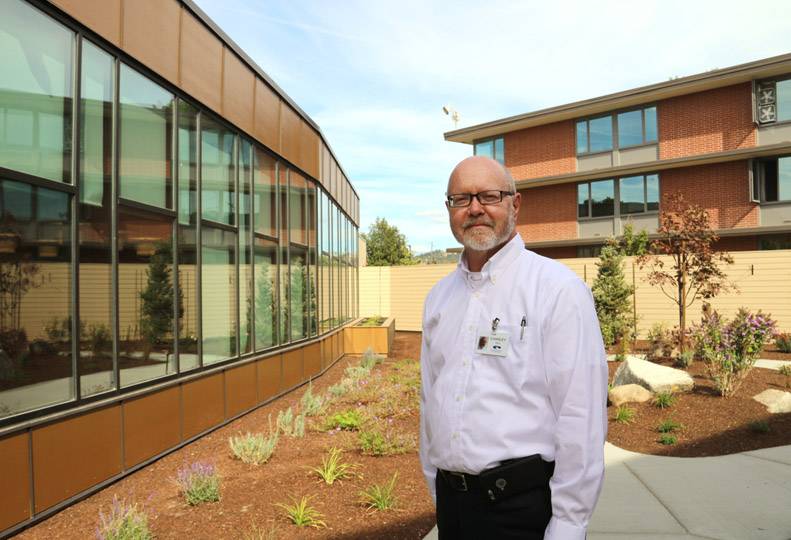 -—Virginia Thomas
Charlie Tirrell, president and CEO of Riverview Retirement Community, says the organization is awaiting an accreditation document but will open soon.

Charlie Tirrell, Riverview president and CEO, says the facility is awaiting a final accreditation document from the Washington state Department of Social and Health Services before it can officially open its doors in October, but an open house is scheduled 3-8 p.m. today, Sept. 27.

Tirrell says Riverview residents were clamoring for a memory care facility when he joined the nonprofit in 2014.

“Two hours after everybody welcomed me, I had probably half a dozen residents say, ‘We really need to have a dedicated memory care building on this campus.’ A lot of that was concern that they had for themselves or their spouses or family and friends,” Tirrell says. “Frankly, one of the shortcomings of this organization is that we do have a secure unit, but it’s in a nursing home. One of the problems with that is, that’s appropriate for people who have (not only) cognitive issues but medical issues.”

Tirrell, who has built memory care facilities in his past roles at retirement communities in Florida and Tennessee, says he wanted to create a memory care building specifically for those with memory issues who have no other major medical problems.

Riverview Retirement Community supervises operations of Riverview Terrace, Riverview Care Center, and Riverview Village, all of which are located on the nonprofit’s 30-acre campus at 1801 E. Upriver Drive.

Riverview Terrace first opened in 1959, and the first floor was remodeled in 1997 to accommodate an assisted-living program. Riverview Care Center, the organization’s nursing home, was built 1967. A wing for dementia patients was added in 1998.

A total of about 450 residents live in the retirement complex, which is staffed by about 300 employees.

Several covered parking stalls were demolished to make room for the memory care facility, which Tirrell says was financed through a loan from Washington Trust Bank.

When planning for the facility, Tirrell said he wanted to avoid cramped corridors and walls that created 90-degree angles. Tirrell worked with NAC Architecture to create a wide, open space that runs the length of the building, separating patient rooms from the dining area and most of the other common spaces. With such a design, staff can keep track of residents more easily, and residents aren’t likely to get lost in the building.

“We wanted it to be as open as possible,” Tirrell says. “One of the things we worked at with the architects in listening to our colleagues as well as residents (was) giving people the ability to wander, both inside and outside.”

To that end, a fenced courtyard with a paved walking path and a patio were constructed on the east side of the building.

Tirrell says the memory care industry has begun to shift away from a hospital atmosphere for those with dementia; caregivers are encouraged to accommodate patients instead of medicating them.

“It’s really a management type of philosophy,” he says. “Part of that is really dealing with the resident where they are today. They can wake up and it’s 1965, and we have to be able to not challenge them, but allow them to live where they happen to be. Rather than us trying to ‘correct’ a resident, it’s our job to help the resident and be involved in the resident’s life wherever they happen to be in their timeline.”

About 15 memory-care facility employees have been trained in dementia and have received other medical training, Tirrell says. Staff members will work long shifts, meaning patients won’t be tasked with recognizing several different caregivers.

“Our staff are going to be there 12 hours a day,” Tirrell says. “One of the big issues with this type of population is that they don’t do change really well.”

In an attempt to create a peaceful atmosphere, the facility will have several features, including an 18-foot-long fish tank, an outdoor fountain, and a living, edible plant wall near the dining area.

While the facility is not yet accepting outside residents, Tirrell says residents currently living within the community have claimed about half of the beds. He expects the facility to be at capacity soon.

Because he believes Riverview’s memory care facility will fill up quickly, he’s already letting people know about other facilities, like Fieldstone Memory Care, which is currently under construction on the South Hill.

“The reality is the numbers don’t lie … the need to take care of people is just very acute,” Tirrell says.