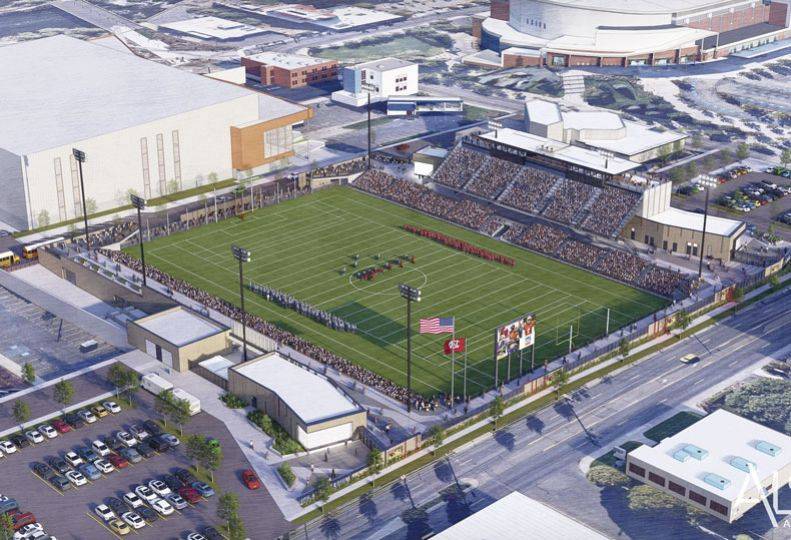 -—ALSC Architects
The new stadium, north of the Podium sports venue and east of the Spokane Arena, is generating more development interest in the North Bank neighborhood, observers say.

An estimated $36 million in commercial real estate has changed hands in Spokane’s North Bank neighborhood since the new sports stadium was announced there.

That’s on top of $19 million in new developments and remodels permitted nearby during the same time period, city records show.

“That is a drop in the bucket compared to the things that will be happening in years to come,” says Steven MacDonald, director of community and economic development for the city of Spokane. “There’s a lot of interest in the area, and that’s encouraging.”

The $19 million figure includes construction of the future Papillon Building and over two dozen renovations planned, underway, or completed. It doesn’t include proposed projects not yet in the system, nor construction of the $31 million-plus Spokane Public Schools stadium, near the southeast corner of Boone Avenue and Howard Street, which observers say is attracting some of that activity. It also doesn’t include the recently opened $53 million Podium Powered by STCU indoor sports venue at 511 W. Dean, just to the south of the stadium site and north of Riverfront Park and the Spokane River.

Stephen Barbieri, commercial and leasing manager for Spokane-based Goodale & Barbieri Co. who tallied the $36 million in transactions, says since the approval of the new stadium on the North Bank, he has seen renewed interest from investors. He cites 14 individual investment purchases of either vacant land or underutilized industrial buildings in that neighborhood in the past two years.

“When you look at the last one to two years of commercial property sales in the surrounding lots … there has been quite a bit of land and redevelopment property purchases,” Barbieri says.

Historically, the North Bank has been more of an industrial area filled with warehouses and concrete block-types of properties, he says.

“Recent sales are with an eye on future redevelopment,” Barbieri adds.

In March of 2021, the Downtown Spokane Partnership and the United Soccer League announced a proposal for a new 5,000-seat stadium to be built in downtown Spokane, replacing Spokane Public Schools-owned Joe Albi Stadium in northwest Spokane.

Two months later, Spokane Public Schools approved the North Bank site for the replacement stadium, which will host the district’s football and soccer games, as well as professional soccer and other functions. As part of the proposal, the Spokane Public Facilities District will take over maintenance and operations of the SPS-owned facility once it’s complete.

Sheldon Jackson, CEO of Selkirk Development LLC, says he’s involved with other developers, city officials, and investors in envisioning the future of the area.

“I was here before the Podium and the (new) stadium,” says Jackson, whose company owns the Papillon Building, at 908 N. Howard, two blocks southwest of the stadium site. “I was at the right place at the right time.”

Jackson says that beyond his own projects in the neighborhood, the vision for the North Bank is one of connectivity.

“To me, it doesn’t matter what you decide to build, but is it connected? Does it flow from one to another?” he asks.

MacDonald says one idea he has heard from many people and on which Jackson has taken a lead, is to widen the sidewalks on Howard Street, north of the Howard Street Bridge and Riverfront Park, so that it can be pedestrian friendly for future crowds.

He contends Howard Street is overly wide for the vehicle traffic it handles and doesn’t provide a good pedestrian connection to Spokane Veteran’s Memorial Arena, which is across Howard Street from the stadium site.

“Widening the sidewalks, creating dedicated bike lanes, and reducing car lanes—if there’s any place to do that, it’s there,” he says.

MacDonald says the North Bank also is gaining attention in regard to planning for the 50th anniversary of Expo ’74, and that many projects will benefit both the anniversary and the new stadium project.

Another potential project that MacDonald has heard proposed by several people involves creating a nearly two-mile, pedestrian-friendly walkway tentatively dubbed the Howard Street Promenade, which is envisioned to run from North Central High School, at the northeast corner of Howard Street and Maxwell Avenue. to Lewis and Clark High School, at Fourth Avenue and Stevens Street.

Several potential names have been bandied about for the area encompassing the stadium and nearby sports and entertainment facilities: the Sports District, the Howard Corridor, and the Entertainment District. However, MacDonald says the name will have to come naturally from the public, and for now, he refers to it as the North Bank.

Jackson currently is developing the Papillon, which will have three restaurants and an additional two floors for office space when completed.

Outsider, a modern American cuisine restaurant owned by chef Ian Wingate, is the first to open there this year. Across the hall from Outsider, Kasa Restaurant & Taphouse, owned by chef Lori Norris, was scheduled at the Journal’s press time for a soft opening today, Dec. 15. The third eatery will be a French-inspired restaurant and social club named Loren, also owned by Norris.

Jackson says once he has completed work inside the Papillon building, he will move on to developing Papillon South, which will face Riverfront Park and be flanked by the Papillon and The Podium.

The first floor will be a public market with vendors and food stalls that will be open during neighboring Riverfront Park hours, he says.

He is currently in talks with the city in making the space a “Pike Place-type” of market that will operate during the 50th anniversary of Expo ’74.

North of the Papillon building, Jackson is collaborating with Canopy Credit Union to develop several parcels of land. Originally, the project called for an office tower to be dubbed North Papillon. However, with the onset of the pandemic and reduced need for office space, he and others have mothballed office-development plans.

“Right now, people are talking about making it residential versus offices,” he says. “But it’s a tough market with inflation and costs.”

MacDonald contends housing will come naturally to the area.

“I still think the long-term thrust will be more residential there,” he says. “It’s just natural for people to be in the midst of this sports and entertainment district.”

MacDonald contends the North Bank will be one of the nation’s premier sports and entertainment districts.

“I’m from LA, and it’s got nothing on what the North Bank has as far as appeal and beauty of the river and the falls,” he says. “From a real estate point of view, it’s amazing.”