Stadium Steps: Details get hammered out on $31 million-plus stadium project

School district, PFD work on formal agreement after pivot to site near core 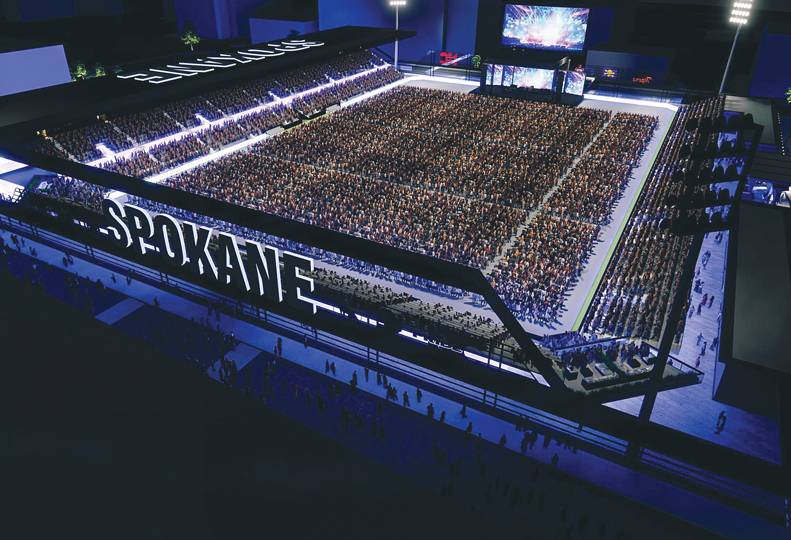 While proponents of a new sports stadium near the city’s core had reason to celebrate recently, a number of steps still need to be taken—and are underway—before the project can come out of the ground.

And those who championed moving the $30 million-plus project to be moved from northwestern Spokane to the site by the Spokane Arena now are about 21 months away from being able to cheer in the stands.

Spokane Public Schools board voted early this month to approve the construction of a new sports stadium just north of downtown, changing direction in its plans to replace the Joe Albi Stadium in northwest Spokane following negotiations with the Spokane Public Facilities District, which will operate and maintain the 5,000-plus seat facility.

The stadium will be built on property owned by the public facilities district and located between Howard and Washington streets, south of Boone Avenue and just north of its soon-to-be-completed The Podium athletic facility.

In addition to The Podium, the PFD also owns and operates the Spokane Veterans Memorial Arena, to the west of the stadium site, and the First Interstate Center for the Arts and the Spokane Convention Center, across the Spokane River and to the southeast of the planned development.

For the stadium project to start, the next step is to turn negotiated terms into a formal interlocal agreement, says Mark Anderson, associate superintendent of the school district.

The terms ensure the school district will retain full ownership rights of the stadium, will be provided priority scheduling rights for events, will pay no more than $31 million to build the stadium, will retain a share of “market-based facility fees,” and will have free and sufficient parking.

A total construction value hasn’t been determined, but the school district has committed $31 million to build the new stadium, which was the projected cost of replacing Joe Albi that was approved by voters in the 2018 bond. Information on the Downtown Spokane Partnership’s website says, “That funding, along with the investment from the (United Soccer League) and additional partners, would cover the cost of the stadium.” The United Soccer League has committed an additional $2 million to the project and disclosed plans to expand its League One with a team in Spokane.

The school district also will be able to use the space for graduations, with a caveat in the agreement that during inclement weather the event would be moved inside The Podium or the Arena, he adds.

“We’re planning to roll up our sleeves and dot the i’s and cross the t’s and get (the interlocal agreement) done this summer,” says Anderson.

Work had been slated to begin this month at the Albi site, Anderson says.

With the decision to move the project downtown, however, work has been delayed by an estimated six months, with construction expected to begin next February.

Spokane-based ALSC Architects PS, which designed the previously planned renovations at Albi, and contractor Garco Construction Inc., will be retained to continue their contracts at the new site, says Anderson.

“The law does allow us to move them to a different site,” he says, so the bidding process won’t need to be redone.

However, the design of the building will need to be adjusted for the new site, he says. The new design work is expected to be completed by the end of this year.

Ken Murphy, principal at ALSC, says it’s too early in the redesign process to know what all will be included and deferred questions to the school district.

Anderson says the design of the downtown stadium will incorporate some elements that were included in the Albi renovation plans, such as the number of locker rooms, size of the field, and the ability to light up the stadium with the school colors of the home team playing for each sporting event, says Anderson.

The new stadium also will be an above-ground stadium, whereas Albi would have maintained its below-grade bowl shape, he notes.

Anderson says the final design of the stadium also will include input from the United Soccer League, which has announced it will invest $2 million into the construction of the new stadium downtown to accommodate a professional soccer venue that will be home field for a USL expansion League One team.

It’s also important to the school district to incorporate elements of the Albi stadium into the new facility, including the bronze statue of Joe Albi and other historic features of the stadium, contends Anderson.

As the new stadium also will reduce significantly the number of parking stalls next to the Civic Theatre, parking for theater events will need to be addressed, he adds.

The current plan is to purchase the Value Village site, located at 708 W. Boone, and turn the space into a new surface parking lot with about 500 stalls, says Anderson.

The PFD will be responsible for addressing any parking shortages, he adds. Discussions are underway with other nearby businesses to use their parking facilities to provide an additional 1,000 parking spaces during high-volume events, Anderson notes.

As for the Albi stadium, it will be demolished, says Anderson.

The demolition work was included in the budget for the new middle school planned at the site.

“We have a partnership with the city, and we’ll possibly have that site available for future development of expanding Merkel Fields,” he says.

Additionally, the terms provide that Spokane Civic Theatre will have sufficient parking available close to the facility during performance nights and will be able to collaborate with the PFD and the school district to solve any noise pollution concerns, Anderson says.

“We’re developing an agreement on considerations – along with the PFD – for including (the civic theater) in the design and any kind of noise mitigation needs for their facility,” he says.

Anderson adds that the agreement aims to build a partnership between the theater and the school district that will establish performing arts training for students.

Meantime, the USL wants to launch a League One expansion professional soccer team in Spokane.

League One is the USL’s newest division. The organization currently has three, its Championship League and League Two, which is the organization’s pre-professional soccer division in North America and allows players to compete while in college.

League One includes teams in North American communities with populations from 150,000 to 1 million. Teams have been established in Madison, Wisconsin; Chattanooga, Tennessee; Fort Lauderdale, Florida; and Toronto, Ontario.

Justin Papadakis, chief operating officer and chief real estate officer with the Florida-based United Soccer League, says a downtown stadium is key to being able to establish a league team in Spokane.

“Having a USL team, a big part of it is having a great venue, but also having it in a downtown setting, because then the impact goes beyond the stadium,” he contends.

Over the next few months, the USL will work to establish an ownership group for the Spokane team before team recruitment begins, he says.

Ideally, team branding and hiring would start 18 months before kickoff. “So, July or August, we’ll really start that process,” he says.

Players for the team will be recruited from all over the world, says Papadakis.

“You have talent produced here in Spokane and at Gonzaga. I think it’s going to be very likely that the team will have several local players,” he adds.

By the time Spokane’s team is up and running, it will join a league of 16 to 18 teams, Papadakis predicts. Currently, there are 12 teams in the league.

Papadakis says the state-of-the-art stadium planned in Spokane will provide good seats for viewing high-level soccer that will be accessible for young professionals and families.