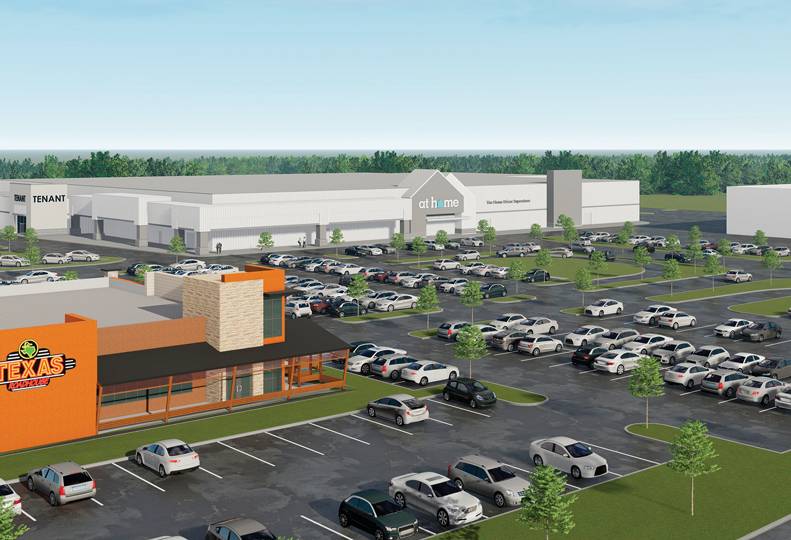 -Herschman Architects
The stand-alone, 7,000-square-foot Texas Roadhouse restaurant is slated to be constructed on the site of the former Costco gas station.

San Pedro, Calif.-Rich Development Enterprises LLC has filed an application to begin site work for the Texas Roadhouse restaurant to be built at the 15-acre site of the former Costco Wholesale Corp. building on Division Street.

Greg Vena, senior vice president of acquisitions and development for Rich Development, says he expects to break ground this spring, and construction is set to be completed before the holiday season.

The site work and parking lot application was under review by the city of Spokane as of early March.

Louisville, Ky.-based Texas Roadhouse Inc. is a confirmed tenant, and a stand-alone, 7,000-square-foot full-service sit-down restaurant will be built near the southwest corner of the old warehouse-retail building in space formerly occupied by the Costco gas station.

Vancouver, Wash.-based The Andrews Group LLC is the contractor on the 74,000-square-foot parking lot and utility work planned for the future restaurant space.

The surface work, totaling $100,000, will include the construction of a certified building pad for the future restaurant and the installation of water and fire lines, a sewer connection, and parking lot improvements.

The restaurant will be the first Texas Roadhouse in Spokane, though it does operate one at 402 W. Neider, in Coeur d’Alene.

Renovations to the 134,000-square-foot former Costco building are also ongoing by Lewisville, Texas-based Parkway C&A LP, to transform the warehouse into a multitenant building.

Plano, Texas-based At Home Stores LLC, a big-box retail chain that specializes in home décor products, announced in October it will be the first tenant of the warehouse space at 7619 N. Division and will occupy just over 86,700 square feet, says Steve Ridenour, broker with Spokane-based commercial real estate company NAI Black.

Roughly $1.3 million in renovations will transform the space into a home décor retail store with 77,000 square feet dedicated to retail space, and 900 square feet of space for offices, a break room, and storage.

Ridenour estimates At Home will open in early April.

He says three prospective tenants, which he declines to identify, are considering leasing portions of 47,000 square feet of space still available.

Rich Development purchased the site for $6.8 million in January and estimates the total cost of redevelopment will be $15 million.

Parkway C&A LP is the contractor on the renovation project, which was designed by Lewisville, Texas-based PKWY Architects LLC.

At Home Stores also is renovating the former 87,400-square-foot Kmart Store, at 201 W. Neider in Coeur d’Alene, for $3.2 million and expects to open its second Inland Northwest location this June.