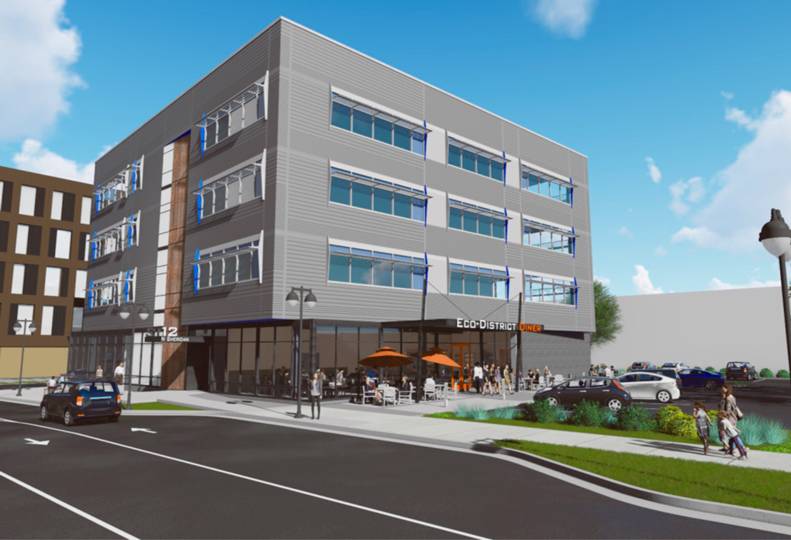 -Bernardo|Wills Architects PC
The $17 million Hub Building will include a total of 40,000 square feet of floor space. The project is expected to be completed in the first quarter of 2020.

Two new buildings worth a total of about $57 million are coming out of the ground on the southern edge of Spokane’s University District.

Construction crews broke ground last fall on the seven-level, 159,000-square-foot Catalyst Building, which is being built at 601 E. Riverside, just east of the south landing for the University District Gateway Bridge. The $40 million building is scheduled to be completed in mid-2020.

The $17 million Hub Building is being built on a site at 611 E. Sprague, just south of the Catalyst Building site. That four-story, 40,000-square-foot structure is slated to be finished during the first quarter of next year.

Bouten Construction Co., of Spokane, is the general contractor on the Hub project, and Bernardo|Wills Architects PC, also of Spokane, is designing it.

On both projects, Seattle-based McKinstry Co., which has a prominent Spokane presence, is the design-build contractor for mechanical, electrical, plumbing, data, and fire-protection systems.

Both buildings are being developed by companies formed by Avista Development and McKinstry Co. principals Dean Allen, Doug Moore, and Bill Teplicky—South Landing Building AA LLC for Catalyst and 611 East Sprague LLC for the Hub.

At Catalyst, Eastern Washington University has committed to leasing 60,000 square feet of space. EWU President Mary Cullinan has said the university plans to move its computer science, electrical engineering, and visual communication design departments to the building once it’s finished.

Allie Teplicky, real estate development manager at McKinstry, says the Hub building will house a central energy plant on its first floor that will serve both buildings. Avista and the Avista Development/McKinstry joint venture that will operate what’s being called the Eco District will take space on the building’s upper floors. The building also has a 3,500-square-foot restaurant space for which the development company is seeking a tenant, Teplicky says. An additional 10,000 square feet of space there remains available to lease.

Eventually, two more office buildings are planned on the site, but plans for those buildings haven’t been finalized yet.