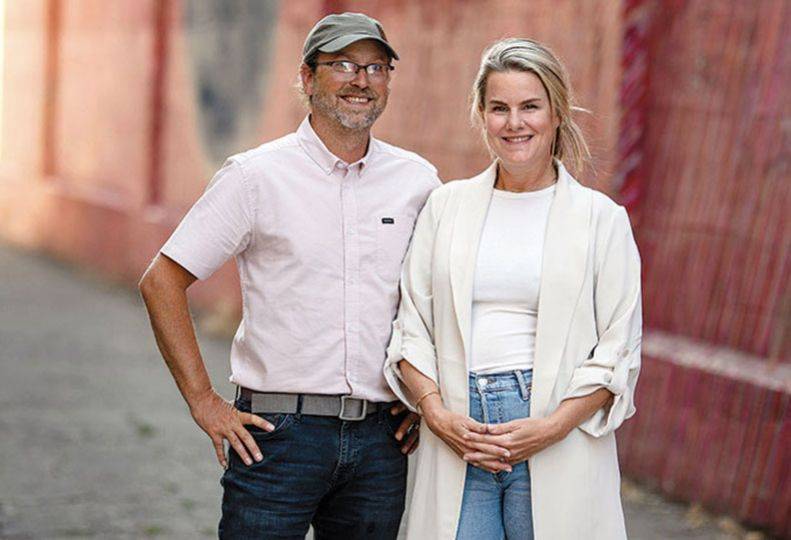 And soon, Uptic plans to move to a larger location and expand its team of architects and designers.

Later this month, the Collinses will launch Uptic Interiors LLC. Led by Julie Collins, who is an interior designer, and a new procurement manager, Uptic Interiors will specialize in residential, commercial, and hospitality projects.

For some time, Julie Collins says, the couple has wanted to provide a service that helps clients fill their spaces with appropriate and intentional pieces that complement the interiors and architecture of their spaces.

One client in particular expressed he could easily go to big box stores or shop online, but he wanted “the full story with Uptic,” says Julie Collins.

“That’s a privilege for us,” she says. “It’s an opportunity we are grateful and excited about.”

Uptic Interiors will have its own website and branding, says Matthew Collins, an architect.

“That’s the original vision of Uptic Studios, to be able to create those service nodes. We’ve been building the backbone with marketing, finance, and our chief operations officer running the engine,” he says. “Now, we can look at layering in other aspects of the design and service industry.”

Uptic Studios completes about 120 projects a year and specializes in custom residential, hospitality, commercial and restaurant design. It is licensed in seven states, with the majority of its work focused in Washington, Idaho, Montana, and Oregon. Currently, the most distant project the studio has is located in Washington, D.C., says Matthew Collins.

The company occupies 3,000 square feet of space at 152 S. Jefferson, just steps away from Barrister Winery, in downtown Spokane. It has 25 employees, including three architects, and eight architectural designers. This year, Uptic has added six professionals to the team, including one employee at a satellite office in Bellingham, Washington. He adds that Uptic is on track to hire roughly six more employees in the coming year.

He declines to disclose annual revenue, but says, “We’re on track to meet our goals.”

In the spring, Uptic plans to move to a 16,000-square-foot location. About 7,000 square feet will be dedicated to office space, and the rest will be warehouse space. Matthew Collins says the new Uptic location will be in Spokane but declines for now to share its address.

He says the warehouse will include a robust shop space where designers can develop ideas, prototypes, design solutions, and scale models as Uptic begins to offer custom furniture and other pieces.

In 2018, Uptic did away with traditional clipboard models, which took hundreds of hours to complete, and began using a 3D printer to print models in a matter of minutes, which the company provides free to clients.

He adds that while 3D printing has saved architects hundreds of hours, and clients thousands of dollars, the design team is excited to use the shop space to unleash their creativity and work through design problems.

“We use 3D printers, but there is nothing like cutting a piece of wood or welding,” he says. “There’s still a lot lost when you don’t have the physical connection and think through problems.”

For this reason, Uptic keeps a big box of Legos, Play-Doh, and other tactile materials that help designers think through ideas.

In Spokane, Uptic’s projects include the $2 million Blockhouse|Life development in the South Perry District, designed by Matthew Collins and developed by Andy Barrett and Cody Coombs.

Some Blockhouse design features were inspired by sustainable infrastructure the Collinses viewed a few years ago during a sustainability tour through Copenhagen, Denmark.

The couple say they would like to see Spokane make better use of its natural resources and build more sustainable buildings and symbiotic relationships throughout the city.

“It’s really powerful when you see what this small country can do so well,” says Julie Collins of Denmark. “Coming back to Spokane and having the Blockhouse project was an amazing opportunity.”

Julie Collins explains that this neighborly collaboration is an example of building symbiotic relationships, such as she saw in Copenhagen.

“That’s what they do there,” she says. “Everybody works together for a common goal.”

The Collinses say they support their staff members pursuing their passions beyond their professional roles.

To that end, Uptic Studios has created a monthly dinner club in which staff members pick restaurants to visit in different parts of town to learn about the community. Some Sundays, Matthew Collins takes employees fly fishing in a drift boat. At times, the Uptic Studios staff also will visit places it helped design, such as the Uprise Brewing space.