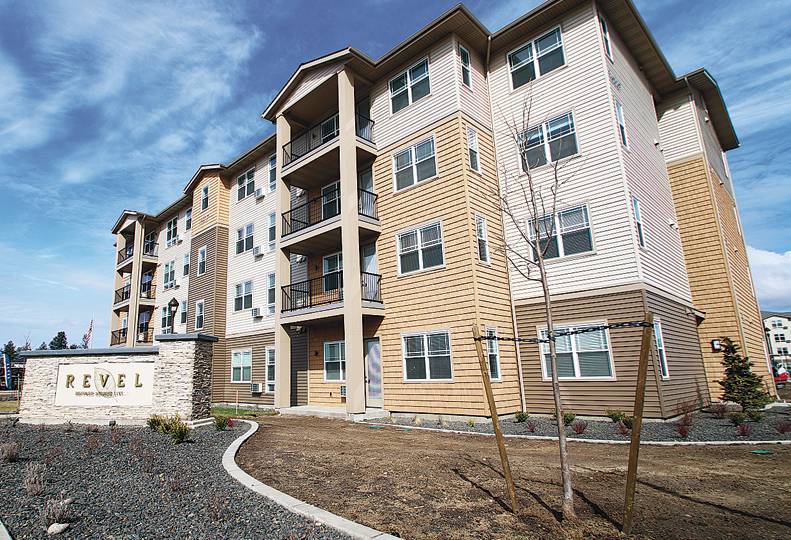 The Wolff Co. has launched its own senior independent-living community brand, Revel, and has opened its first such facility in the Spokane-area at 16807 E. Mission Parkway, in Spokane Valley.

Wolff Co. is a private equity and development company that invests in, acquires, and develops multifamily properties. Based in Scottsdale, Ariz., it has offices in Washington, Massachusetts, and California, including one in downtown Spokane at 717 W. Sprague.

CLT is a wood panel comprised of several layers of wood glued together at 90-degree angles to create sturdy structural panels. Katerra Inc., an off-site construction technology company, is building a CLT manufacturing facility in Spokane Valley. Katerra is co-owned by Fritz Wolff, the executive chairman of Wolff Co.

Revel Spokane, valued at $15.2 million according to permits on file with the city of Spokane Valley, consists of two four-story apartment structures connected by a two-story clubhouse, in which shared amenities of the complex are located.

Altogether, the complex totals roughly 41,000 square feet and has studio, one-bedroom, and two-bedroom units. It was designed by Bernardo|Wills Architects PC, of Spokane, and constructed by Katerra Construction LLC, of Scottsdale.

“Our entire culture is based on a resident experience company,” says Byers. “It’s all about experiences that people can have at this point in their life.”

To this end, the company uses what’s known as Lumin Living, a program developed by Wolff Co. and inspired by author and speaker Roger Landry’s works on senior living.

Byers says the program is based on the six designated “pillars of wellness,” which include amenities that address the physical, intellectual, social, spiritual, emotional, and occupational needs of the residents.

Amenities include a meal program that offers menus created by Chef Beau McMillan that are focused on healthy eating at two in-house restaurants, the formal dining restaurant named Ovation, and the Social Club, which Byers compares to a sports bar.

Also included is a fitness center that offers eight types of fitness classes a week, seminars for intellectual stimulation, social activities, arts and crafts classes through the arts studio, and partnerships within the community to allow for volunteer opportunities, Byers says.

“Live long, die short—that’s our whole mantra,” says Byers. “That you want to have a full, long life and do everything you can during that time.”

A theater room, salon, spa, and 24/7 concierge are also available to residents.

Currently, about 40 percent of the units are reserved, Byers says. Units range between $2,300 and $4,300 depending on size and amenities included.

Byers says Revel is different from other senior housing communities because it is completely independent living—meaning the company doesn’t have in-house nurses or caregivers.

“There’s a real belief in the industry that people will need assisted living,” she says. “That’s not true … a lot of folks will go to communities that have the independent, assisted living, and memory care or skilled nursing all-in-one assuming that someday they may need that level of care.”

Byers likens this trend to a 16- or 17-year-old purchasing a minivan because they may have children someday.

“A lot of (retirement communities) have the independent and assisted living all on one campus and over time, unfortunately it becomes one big assisted living … not everybody needs that, and they miss out on an opportunity to have the best style of life they can,” she says.

Wolff Co. currently has eight Revel communities actively leasing, and another 10 in various stages of development and construction in Washington, California, Oregon, Arizona, and Nevada according to its website.

A Wolff Co. representative couldn’t be reached for comment on its broader development plans.

The Wolff Co. has its roots in Spokane, where it was founded by Wolff’s grandfather, the late Alvin J. Wolff. The Wolff family decided to move to Scottsdale in 2000, but Fritz Wolff and other family members returned to Spokane in 2009.