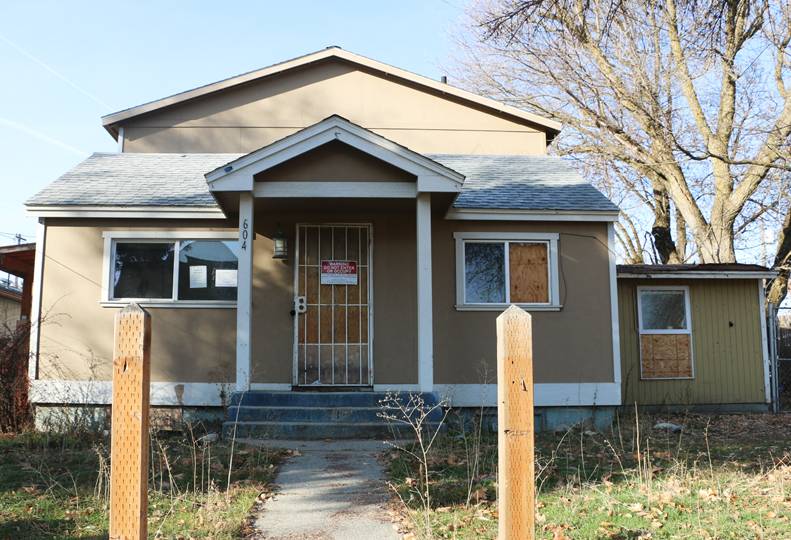 -—Virginia Thomas
A coalition of Spokane professionals are meeting to address the issues of abandoned, or “zombie,” properties in the Spokane area.

A loose group of Spokane professionals has begun working to relieve some of the pressure the area’s housing market is under by bringing “zombie homes” back to life.

Spokane Association of Realtors government affairs director Darin Watkins says zombie homes are so called because they are often the result of a stalled foreclosure. They’re unoccupied and neglected, yet they remain the homeowner’s responsibility. Such homes can turn into nuisance properties overrun with squatters, crime, and neglect.

“They’re a blight on the neighborhood,” Watkins says.

Watkins is part of a group that is informally known as the zombie homes coalition, which comprises about 40 people, including city employees, representatives of nonprofit organizations, real estate agents, and developers.

The coalition began forming about a year ago, after the City of Spokane spotlighted the issue in a video on its website, he says.

In August, the group went through a training program offered through the National Association of Realtors and led by an organization called the Center for Community Progress.

“We brought in some national speakers just to look at ideas that other communities had to try to find ways to transition those houses from being vacant to back on the marketplace,” Watkins says. “We brought a lot of people together that don’t normally talk to each other, and there were some really cool benefits of that.”

Watkins adds, “After we had this training, we all got fired up about what could happen. We said, ‘Let’s stay together and talk about these things.’”

The coalition’s first order of business was to determine how many zombie homes exist in Spokane.

The city of Spokane initially had estimated there were about 1,200.

By examining how many homes have had water service shut off for at least six months, however, the coalition determined that there are about 3,000 zombie homes in the city.

Jason Ruffing, code enforcement officer with the city, says it’s hard to say exactly how many such homes are in Spokane due to a lack of a concrete definition.

“I would be surprised if the number was that high in the city limits, but zombie property can mean many different things to different people, so it can be a hard figure to approximate,” Ruffing tells the Journal via email.

But both the city and the Spokane Association of Realtors agree that those empty homes, however many exist, do nothing to help Spokane’s real estate market to cool down.

“That’s a home that someone could be buying,” he says. “Empty homes don’t help anybody. We’re in a housing crisis in Spokane, by any measure.”

A housing supply of less than four months represents a seller’s market, Watkins says, while Spokane’s supply is currently at about five weeks.

“I don’t see any sign of (the market) slowing,” Watkins says. “That’s the scary part. We’ve been at double-digit (price) growth in this city for five years — it’s unprecedented.”

Cleaning up zombie homes and getting them back on the market could ease the need for housing, but there are numerous obstacles.

Part of the issue is that when a lender forecloses on a home, some owners believe they are required to move out immediately, but the lender isn’t responsible for the property until the foreclosure process is completed.

“There’s some evidence, according to the city, that banks are hanging onto these houses for longer than they should — four, five, seven years — because they’re not in the bank’s name yet,” he claims.

Houses that have been abandoned outright often go through the foreclosure process slowly, Watkins says.

There are a number of reasons as to why homeowners abandon a home. While many homes are abandoned as the result of a foreclosure, some are abandoned because the owner died without heirs. In other cases, an owner has been incarcerated, and some owners simply skip town.

“These properties still have an owner at least somewhat involved with the property and paying taxes. They are just choosing to leave the property vacant and sometimes in substandard condition,” Ruffing says.

Heather Trautman, Spokane’s director of neighborhood services and planning, says the city has been working to address abandoned properties, including zombie homes. The city uses an existing process that was originally meant to be a way for building officials to notify property owners of a substandard building, Trautman says.

The city has been marginally successful in this program, Watkins says, but he complains that the criteria for declaring a house to be substandard make the process too long. There are 12 criteria, two of which must be met in order for the city to declare the structure as substandard. The criteria include factors such as exterior decay, inactive utility service for a year, and the building having been boarded up for more than a year.

“It’s hundreds of man-hours,” Watkins says. “They have five officers in that department doing all of the code enforcement stuff.”

Through the zombie homes coalition, Watkins hopes to see more options for dealing with abandoned homes. Simply gathering together people invested in the issue already has begun to provide some solutions, he says.

“Some of the best ideas that came out of that (August training program) were things like making sure the county talks with nonprofits,” he says. “The county has launched a program through which you can get help with your property taxes — the nonprofits didn’t know about that.”

Linking nonprofits with the county program could result in fewer homeowners falling behind in property taxes, meaning fewer foreclosures and fewer such homes.

One option the coalition is considering involves establishing a land bank that would be run by Spokane County for zombie homes that have issues with transferring the title from the homeowner to the lender.

“The county could help transfer some of these homes that don’t really have any owners or any issues into the possession of the county, then find nonprofits to rehabilitate those homes and get them back on the market,” Watkins says. “Habitat for Humanity is a great example. They would love more houses, but they can’t afford the houses that are out there right now.”

This idea is similar to a receivership, which the city has already implemented as one solution, Trautman says.

“A couple of properties have gone through that, where there’s a court process asking the lender to come in and tell us what they’re going to do,” she says. “At the end of the court time, the court can assign a receiver, basically a responsible party, to look after the property and make decisions about it. That has resulted in the properties moving to other hands, and it’s led to rehabilitation of the building.”

The coalition also is investigating developing a public database of abandoned homes, Watkins says. Through the database, nonprofits and others could find abandoned or foreclosed properties to buy.

Similarly, the city has considered the idea of a foreclosure registry, Trautman says. Such a registry would provide a way to contact the appropriate person associated with the property.

“On the face of a property, it may say ‘Lender X,’ but how do you contact the lender to let them know that something’s going on with the property?” Trautman says. “The registry would require the lender to put a local servicer’s contact information, so if something happened, the city could contact them about that property.”

The coalition is examining ways to work with the state Legislature to streamline the process of transitioning a foreclosed property from owner to lender.

After the August training program, members of the coalition went their separate ways to investigate potential solutions discussed in the program. The coalition will meet up again in spring to discuss their findings.