•New trend in financial planning emerges •Some professionals caution against it 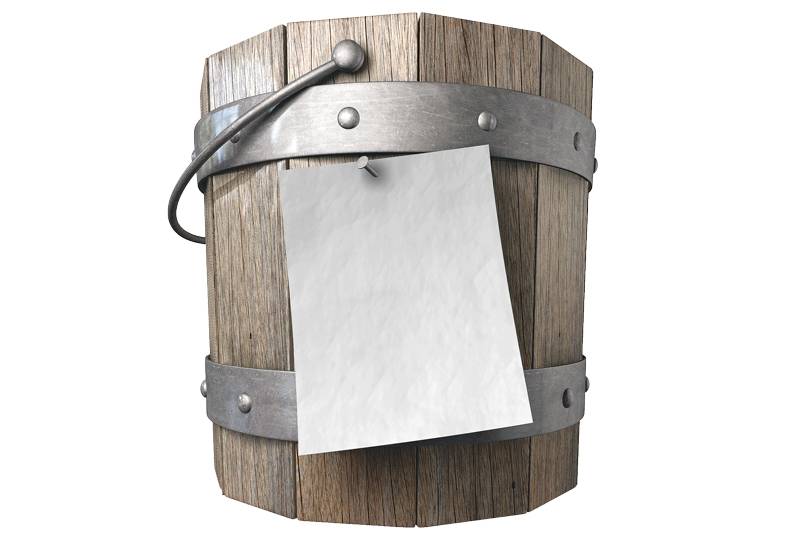 The past 18 months have brought on a shift in mindset which has made many people anxious, empowered, and energized to do things earlier than initially planned, says Michael Jackson, senior vice president and Spokane-Coeur d’Alene branch manager at D.A. Davidson & Co.

“Coming out of the pandemic, people feel that time is moving very fast,” says Jackson.

Bucket-list living is a financial planning trend that has begun spreading since the onset of the pandemic. According to a U.S. World News & World Report article, the premise is retirement planning—which includes financial strategies of saving, investments, and ultimately distributing money for income during retirement—should be more about enjoying the journey than focusing solely on the destination.

A bucket list has traditionally been viewed as a list of adventures and experiences to be checked off during a lifetime. However, since the pandemic, more people are making big life changes to take control of their everyday lives such as changing careers, divorce, and entrepreneurship, financial advisers here say.

He says he has seen a lot of clients leave strong careers to go into business for themselves or enter partnerships in which they can take control of their day-to-day lives. In 2021, markets were up 20% and many people saw their wealth accumulate rapidly and reach at least a significant level of retirement savings goals earlier than expected.

With that, Jackson says many people felt confident that they could leave their careers with a sum of money to keep them afloat while they start on their new ventures.

He predicts a lively uptick in new businesses in downtown Spokane in 2022.

“I think we’re beginning to see some of those energetic entrepreneurial mindset type of clients who are saying, ‘I want to do something on my own and the time is now, markets are up,’” Jackson asserts.

In addition, a number of outside factors have also contributed to people’s new mindset including supply chain issues and a low housing inventory.

“People are feeling the pressure of supply and demand really for the first time in decades where if you want something, you might not be able to get it,” says Jackson, noting that car dealerships currently have just a handful of new cars.

Jackson adds that he has had many clients who had dreams of buying a second home someday are now focused on making that someday dream a reality.

“Whenever we get into a place where markets rise like they did, people feel in essence that it’s only going to go up and up and if I don’t do it now, I’m never going to get it,” says Jackson.

“I think we’re all emotionally adjusting,” says Carlson. “A lot of things have been out of control and participating on a bucket list item is a way to get control and savor the journey.”

Carlson cautions, however, that the downside to this emotionally charged atmosphere is that many people tend to be reactive for a fear of losing out on a home, or car purchase, or a vacation and later regret their impulsive purchases because they didn’t take the time to financially plan for them.

She says she had a client come in at the start of the pandemic who wanted to live in Europe for a year and wondered if she was able to do so.

“I told her, you’re one emergency away from being homeless,” she says. Since that meeting, however, Carlson has helped the client save up a significant amount of money toward her goal, she says.

However, Carlson also notes she’s seen a lot of people who retired early because of burnout are now beginning to look to get back into the workforce.

Paul S. Viren of Viren & Associates Inc., says that, at the start of the pandemic, he saw people moving up home improvement projects that had been earmarked for later years as a way of improving their personal environment.

The biggest change he has noticed however is the rate of divorce.

“I’ve seen more divorces in the past year than I have in my 28 years in practice in all age groups,” says Viren.

With the end of marriages, he’s seen bucket lists torn up, priorities change, and new budgets made.

Divorce has a profound effect on financial planning, says Carlson. “There’s no way to live less expensively apart, and if there are kids involved, everything becomes more complicated.”

However, as people are embracing an approach to a new career that allows them to live a balanced life, Viren cites a recent New York Times article that highlights rising costs in Spokane, which says, “the next affordable city is already too expensive.”

“Spokane does not have the core industries to afford a $400,000 home like Seattle has Microsoft,” says Viren, adding that although Spokane has seen a rise in Amazon jobs, they are service oriented and don’t provide high-paying wages.

As prices in property taxes, utilities and groceries go up, financial planning has to be adjusted for several moving parts, he notes.

According to the Community Indicators Initiative of Spokane, the total population for Spokane County grew by 2,761 new residents in 2021. In 2020, it grew by 24,089 new residents.

Over the past two years, home prices have soared 60% reports the New York Times.

“It’s no longer an incredible deal with real estate,” says Carlson. “But it’s still less expensive and more affordable than other big cities,” she adds.