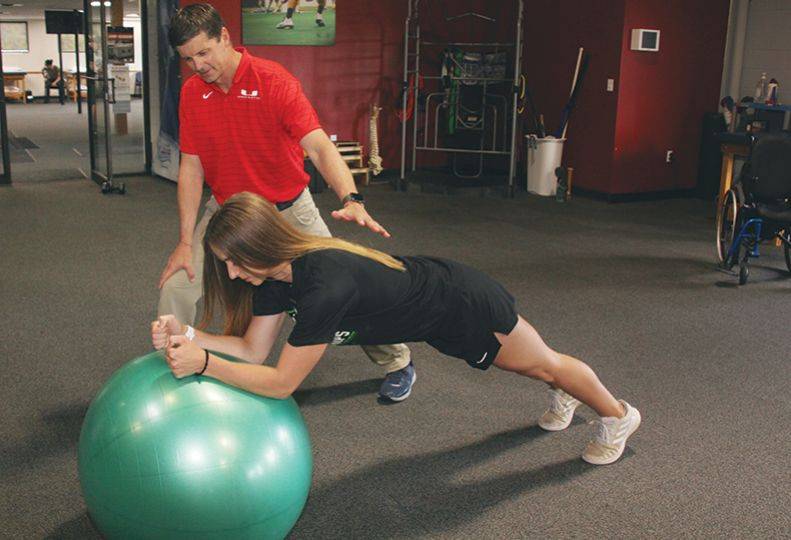 Inland Northwest physical therapy clinics have been busy trying to keep up with patient demand for rehabilitation services now that elective surgeries are underway again at Spokane-area hospitals.

The capacity of most clinics to meet the steady need for treatment during the global health crisis declined at the onset of the pandemic, as clinics had to scale down the number of people allowed inside—and as patients and staff at times kept their distance because they were either dealing with the illness or to avoid contracting it in a health care setting.

Meanwhile, people were still getting injured, and the demand for physiotherapy services remained consistent or increased, causing a backlog of patients waiting for services.

Brian Cronin, owner of Spokane-based U-District Physical Therapy & Institute of Sports Performance, says when hospitals started performing surgeries again, it created a surge of patients who needed post-operative rehabilitation services that his clinic and others are still contending with today.

“There’s definitely a waitlist now for physical therapy services,” Cronin explains. “There’s really never been a waitlist before, and now you’re probably at least six weeks out unless it’s an emergency.”

She says OPTI has been operating at full capacity for the past year with 12 physical therapists who work at two clinics in Coeur d’Alene and Post Falls.

Right now, Lamson says, patients can be seen within three days, which is similar to wait times before the pandemic.

With warmer weather finally here, she says, injuries are likely to increase and escalate patient demand, because people are outside more frequently.

And as more pandemic-related safety measures have expired, Cronin says, a growing number of people have started attending or participating in athletic events, competitions, and tournaments, including Bloomsday and Hoopfest.

“So you have people returning to those normal sports activities that will generate injuries too,” Cronin says.

That’s on top of more people returning to worksites and experiencing injuries on the job.

The result is the need for expansion for some clinics and a surge in hiring for others to keep up with patient demand.

At U-District Physical Therapy, patient volume has grown 25% in the past year compared to pre-pandemic levels, he says.

To meet demand, “We just hired three new physical therapists this month, and that’s well above the normal average of trying to hire people,” he says, adding that in a typical year, one to three providers join the clinic.

The practice has 60 employees with 23 physical therapy providers in three clinics throughout Spokane County, he says.

“Most clinics or physical therapy spaces only have a certain amount of square footage and can’t absorb a 25% increase in volume,” he says. “They don’t have the space, and they also don’t have the staff to accommodate that.”

On the bright side, he says, the public is beginning to realize the value of physical therapy in the community now that they’re waiting for services in some instances.

In North Idaho, OPTI plans to open a new clinic in Hayden in January to meet growing demand for services.

“Physical therapy is very geographical, so patients want to go close to their home or work,” Lamson says. “We have quite a few patients who come in from Hayden and north of Hayden, so it’s for their convenience so they don’t have to commute as far.”

OPTI is a division of Coeur d’Alene-based Orthopedic Surgery & Sports Medicine Clinic LLC, which Lamson says is a benefit to patients, because physical therapy services can be expedited after surgeries performed there.

Another benefit is the care team has immediate access to doctors and surgeons.

She adds, however, that clients don’t have to get referred by the sports clinic to receive physical therapy services.

“The largest demand for services is with injured workers and patients recovering from elective surgeries,” she says. “Our therapy teams are nearly 100% fully staffed, and we’re able to keep up with the demand to meet the needs of our patients.”

Bri Lusk, marketing director of Spokane-based Summit Rehabilitation Associates, says the company has remained busy despite the pandemic due in part to its 25 years of practice and partly because of Summit’s diverse service offerings.

Lusk says patients may have a wait for some specialty services, but in emergency situations, they typically can be seen within 24 hours. She also notes a patient could end up on a waiting list if scheduling conflicts arise.

“We’re also hypersensitive and cautious with COVID so prevalent in health care. We want to make sure we aren’t sick ourselves when treating patients and making sure patients aren’t sick when they come in, because we don’t want to expose people. That’s still a bit of a challenge,” Lusk says.

Summit has 23 physical therapists at four clinics in Spokane County. Lusk says the most popular services are L&I and worker’s compensation therapies, which comprise about 40% of cases.

Lusk says there’s no indication of demand “going back to normal,” as Summit is currently hiring for physical and occupational therapists as well as planning to expand with a new clinic in Airway Heights by the end of the year, or early next year.

With the many new businesses on the West Plains there’s a big opportunity for the company, she says.

“Airway Heights is growing immensely,” Lusk says. “With new businesses like Amazon coming in, we see the need and potential demand for physical therapy services there.”