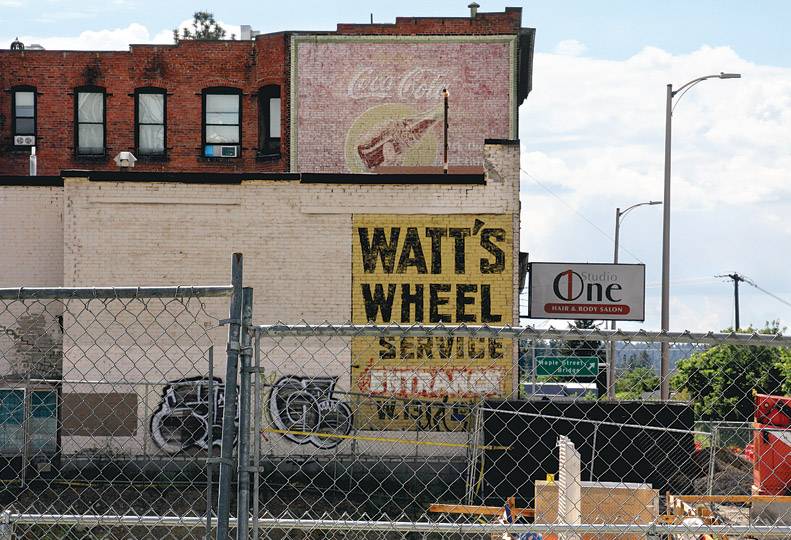 -—Samantha Peone
A group of Spokane real estate investors has bought the former Watts Automotive building along First Avenue. The building and its neighbor are expected to become home to a restaurant and brewery.

Including the purchase of the property, the total project cost will be between $3.5 million to $4 million, depending on final project details, says Tampien.

The project is one of roughly $50 million worth of development taking place on the west end of downtown Spokane.

Watts Project is owned by Tampien; his brother, Joel Tampien; and another set of brothers, Matt and Ryan Goodwin. The Tampien brothers co-own 4 Degrees Real Estate, of Spokane. Matt Goodwin is a Spokane restaurateur, and Ryan Goodwin lives out of town.

Jordan Tampien says the two buildings have a total of roughly 15,000 square feet of space and formerly were occupied by the Watts Automotive & Driveline Service garage, which closed about a year ago. Watts Automotive’s website says the family-owned company had operated for more than 50 years.

He says the multitenant space already houses Studio One hair and body salon, which occupies 1,600 square feet of space on the north side of the building, facing west Sprague Avenue.

As of earlier this week, Tampien says Watts Project is looking at a few choices for the restaurant. He says the eatery likely will serve conventional pub food.

Tampien says he and Matt Goodwin searched for a brewery space for three years before choosing the former Watts Automotive site.

Although they don’t plan to brew beer themselves, Tampien and Goodwin are negotiating with a brewer, he says.

The unnamed brewery will have a historic, industrial feel and possibly will include a rooftop deck for private events, he says.

Tampien says he’s seen the positive impact a brewery can have on a neighborhood.

“There’s been very few businesses that I’ve seen that have catalyzed an area like a brewery and restaurant concept,” he says.

The brewery and restaurant are expected to open in the spring of 2019, he says.

Tampien says Watts Project bought the two-parcel site because the city of Spokane plans to turn the empty area abutting the property east into a park-like plaza.

Marlene Feist, strategic development director for the city’s Public Works department, says the plaza is part of the $16.3 million combined sewer overflow tank installation. The plaza will sit directly above the tank.

Feist says the plaza will include green space, trees, and eventually, a Central City Line bus stop. Work on the CSO project is expected to be completed around the end of this year.

The Watts Project acquisition comes on the heels of a separate proposal for a $10 million-plus, seven-story multiuse building and possible multistory parking garage just across First Avenue, south of the planned brewery, as recently reported in the Journal. Tampien is project lead on that development.

As envisioned, the project, named 1st Ave Redevelopment, will include commercial space on the street level. The other stories will have a total of 48 one-bedroom and two-bedroom apartments, ranging in size from 550 to 1,050 square feet of living space, he says. For residents, the building also is expected to feature a fitness center, high-speed internet, and lockers for package drop-offs.

Construction is anticipated to start in September and take a year to complete. Trek Architecture, of Spokane, is the architect, and T.W. Clark Construction LLC, of Spokane Valley, is the contractor.

Due to asbestos issues, the project has been delayed, but Rystadt says he hopes the hotel will open in spring 2019.

“We’re moving forward, and I hope we get this done soon,” he says.

The Hotel Indigo brand is a subsidiary of InterContinental Hotel Group, a multinational British hotelier. The Otis Hotel Building had been vacant for more than seven years before Rystadt purchased it last June for $1.4 million through his real estate holding company, 110 S. Madison Realty LLC.

Case Design Group, of Portland, is the architect, and Burlington, Wash.-based Fisher Construction Group is the general contractor.

Predevelopment plans for the project call for converting eight lower-level residential units into accessible units in compliance with the Americans with Disabilities Act.

The project involves installing hardwired smoke and carbon monoxide detectors in all units, replacing wiring throughout the building, and replacing kitchen cabinets, air-conditioning units, and ventilation fans in all of the units. The project also involves replacing kitchen appliances, lighting, and flooring as needed on a per-unit basis.