All Systems Go at Hotel Indigo 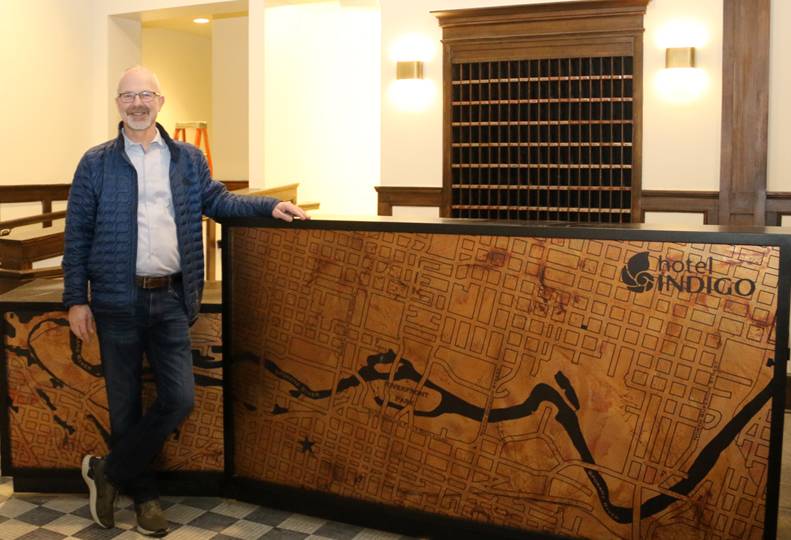 After a decade of standing vacant and more than two years of remodeling and renovating, the former Otis Hotel building will once again host hotel guests next month, this time under the name Hotel Indigo Spokane.

Restoring the 109-year-old hotel at 110 S. Madison and updating it for 21st century guests has been an expensive process. More than $15 million has gone to redeveloping the building into a 112 guest-room boutique hotel and restaurant since Portland-based developer Curtis Rystadt purchased it in June 2017 for $1.4 million through his real estate holding company 110 S. Madison Realty LLC.

As work on Hotel Indigo Spokane wraps up, general manager Patrick McLaughlin says he’s excited to see the results of combining a historical setting and modern amenities. Because the 93,000-square-foot building is on the National Register of Historic Places, McLaughlin says, a great deal of effort went into restoration.

About half of the wood trim in the lobby is original, he says, while the rest was made to match the antique woodwork. The leaded glass windows are new, but were designed after the originals based on old photos. An antique safe that was removed from the basement will stand near the reception desk, while a steam pump from 1913 will stand in the lobby foyer.

Some of the original features remain, such as the square stone tiles of the lobby’s floor; the tiles were damaged in places, and had to be repaired, McLaughlin says.

“Everybody who’s walked through this hotel since 1911 has walked on that floor,” he says.

Antique fire doors that predate electricity still hang at the entrances to hallways, though they no longer serve their original function.

“In the old days, it worked on some sort of cord system,” McLaughlin says. “When the cord burned through, then the door would close itself.”

The building originally had 45 guest rooms per floor, but some were combined to create 28 larger rooms per floor in the recent renovation. Doors painted blue lead to guest rooms, while doors painted the same gray as hallway trim are remainders of the old rooms. Keeping the doors was less expensive and took less time than replacing them with walls, McLaughlin says.

The design and architectural elements that aren’t original have been selected to reflect the history of the building and of Spokane, McLaughlin says. Each elevator landing and guest room features a mural of a historical photograph. In one room’s mural, a train is shown crossing a bridge that once passed over the north landing of the bustling Monroe Street Bridge. Another mural features the former three-story A-1 Drug Co. drug store building the northwest corner of Main Avenue and Wall Street, the current site of the recently redeveloped 10-story M Building.

In the lobby, the reception desk is etched with a map of Spokane; a star marks the location of Hotel Indigo Spokane. The drawer pulls on the nightstands resemble steam locomotive valve handles, while the headboards are reminiscent of train tracks.

The Hotel Indigo brand is a subsidiary of U.K.-based multinational hotelier InterContinental Hotels Group. According to the IHG website, a standard guest-room at the Hotel Indigo Spokane will cost about $150 per night.

About 60 people will be employed at Hotel Indigo Spokane and Magnolia American Brasserie. McLaughlin says that he understands how tight Spokane’s labor market can be — before joining Hotel Indigo, he was general manager of the Ruby River Hotel Spokane — so he’s trying to make Hotel Indigo Spokane an appealing place to work. For example, he’s put in supply closets on each floor so that housekeeping staff don’t have to traverse floors in order to have the supplies they need.

While the building itself is historical, McLaughlin says he knows travelers expect modern amenities, which is why guest rooms are equipped with computer-controlled thermostats, as well as furniture that has built-in electrical outlets. Instead of vending machines on each floor, the lobby will have a small market area where guests can purchase quick bites. An internal fire escape route was created to replace the external fire escapes, which are no longer functional but have been left on the building as part of its historical décor.

McLaughlin says Hotel Indigo Spokane also will offer valet parking. Guest vehicles will be taken to a secured lot off of Railroad Alley.

“There’s not a ton of parking downtown, so we’ve set this up as pretty much valet only,” he says.

The hotel also has an eye toward environmentally friendly practices, McLaughlin says. For example, rather than the hotel providing tiny bottles of toiletries, every shower has wall-mounted units that will dispense Gilchrist & Soames soap, shampoo, and conditioner.

On the ground floor, guests can access the 4,500-square-foot Magnolia American Brasserie restaurant and bar either from the hotel side or from a separate entrance on West First Avenue. As previously reported by the Journal, the restaurant will feature affordable, casual, French-influenced fare such as oysters Rockefeller and tuna niçoise salad.

“It won’t be white tablecloth; it’ll be casual country French,” McLaughlin says. “The restaurant will have a separate identity, but it will go well with the identity of the hotel.”

Spokane-based Uptic Studios designed the restaurant, which McLaughlin says will have a refined warehouse look. Massive crystal chandeliers will hang over large farmhouse-style tables, with smaller booths and tables around the edge of the room.

The hotel changed hands — and names — four times: it became the Atlantic Hotel, then the Milner Hotel, then the Earle Hotel, before it was renamed the Otis Hotel in 1956. Later, it became apartment units for low-income residents. In 2007, an investment group bought the building, displacing more than 30 low-income residents; the building was vacant until Rystadt bought the property a decade later.