Project Fireball to include 1.3M square feet, is similar to megaretailer's other projects 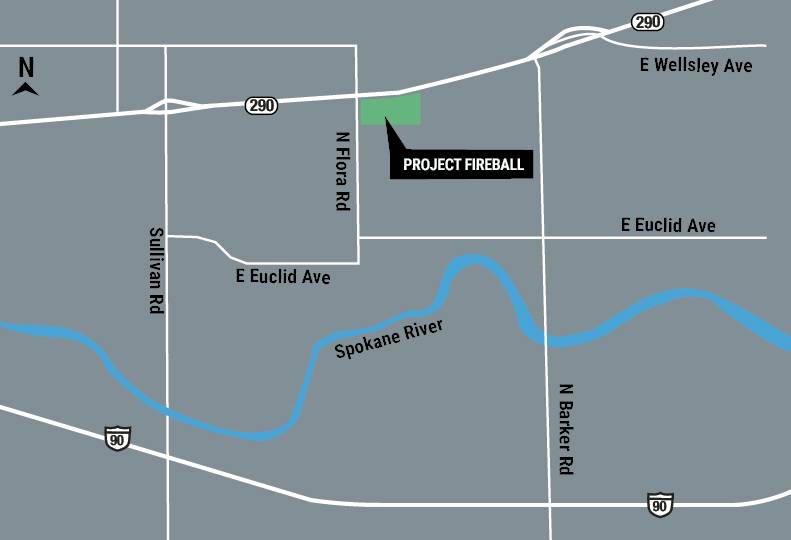 -Journal of Business
The 1.3 million-square-foot distribution facility will be located in an industrial area in Spokane Valley.

The city of Spokane Valley today approved a permit for initial grading work for a 1.3 million-square-foot building.

The company behind the development, characterized as Project Fireball, isn't listed in public documents, but the project has some of the characteristics consistent with other Amazon.com Inc. facilities.

A representative of Seattle-based Amazon didn't respond immediately to a request for comment, but the project has some similarities and loose connections with the massive Amazon fulfillment center, initially called Project Rose, that opened on the West Plains in June.

A building permit application for Project Fireball is for a foundation for a 1.3 million-square-foot building at 17205 E. Garland, in an industrial area of Spokane Valley. The approved engineered grading permit states that the work is for a "warehouse building with site improvements."

The project site is on a 70-acre plot of land owned by Centennial Properties Inc. east of North Flora Road and just south of East Trent Avenue, according to Spokane County Assessor's records. It's directly north of Wagstaff Inc., in an industrial area near the Katerra Inc. cross-laminated timber factory and the new Cowles Publishing Co. printing press facility.

Centennial Properties is owned by Spokane-based Cowles Co. The Journal of Business is also a Cowles Co. subsidiary.

The building-permit applicant is Portland-based design company Mackenzie, which also has offices in Seattle and Vancouver, Washington. Mackenzie is also the architect listed on the project.

According to the company's website, Mackenzie has worked on projects with Trammell Crow Co., which was one of the developers involved in Project Rose. Mackenzie also has completed two Portland-area industrial logistics centers for Portland-based Capstone Partners LLC. As reported by S&P Global, the Salem, Oregon distribution center that Capstone Partners LLC had developed in concert with Pacific Coast Capital Partners sold for $105.5 million in July 2019. At that point, Amazon had leased the building for 12 years.