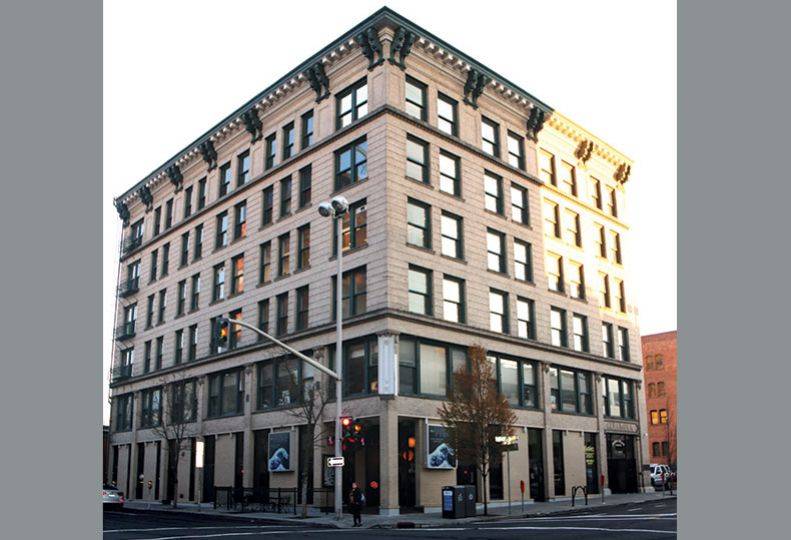 Earlier this month, prominent Spokane-based commercial real estate brokerage and property management company NAI Black, of which Black is also CEO and owner, moved its longtime headquarters from that building, at 107 S. Howard, into the Spokane Regional Business Center, at 801 W. Riverside downtown, where it now occupies 16,000 square feet on the third and fourth floors, says Black.

The move frees up 12,500 square feet of space NAI Black had occupied in the 111-year-old James S. Black Building.

“We’re looking at all our options for that building right now, including converting it into multifamily rental units,” Black says.

Another option would be to continue leasing the building as mostly office space, he says.

However, Mercier Architecture & Planning, of Spokane Valley, is designing floor plans for the potential multifamily space. Mercier owner and architect Shane Mercier says the space is being configured so the building’s upper five floors could accommodate a total of 40 living units, with eight on each floor. Floor plans would include one-bedroom and two-bedroom apartments, Mercier says.

No changes would be made to the century-old building’s exterior, he says.

Black says construction likely would start during the summer of 2019, and the units would be geared toward young professionals.

The street level would continue to be used as commercial space, he says.

That floor currently is occupied by The Wave Island Sports Grill & Sushi Bar and Fusion Juice of Spokane Inc.

Black says the building has two other tenants, publishing company Bozzi Media and general contracting company Fisher Construction Group. If the building becomes a multifamily complex, those tenants will be moved to another building.

“Rents have gotten to the point where they are better than office rents,” he asserts. “The multifamily market is really strong right now, and I believe it will continue to be strong.”

Another incentive, he says, is that a multifamily project within the Black building could qualify for tax incentives, including a city of Spokane 12-year multifamily tax abatement program and a federal tax credit for historical building rehabilitation.

As evidence of the health of the multifamily market, Black points to the Ridpath Club Apartments redevelopment. NAI Black is handling leasing activity there.

“We’re renting units at Ridpath as fast as they become available, which is right next door, and most of the other projects downtown have filled up quickly,” he says.

The $22 million redevelopment of the Ridpath Hotel and the attached four-story east annex involves transforming prior hotel rooms into 206 apartment units on the second through 11th floors and luxury condominiums on the 12th and 13th.

If Black proceeds with his plans, he’ll be following what’s becoming a trend in the city’s core.

Centennial Properties Inc., of Spokane, is renovating the former Macy’s department store building, at 608 W. Main, into a mixed-use building with 114 residential units, the first of which became available to rent last May. That building, now called The M Building, is undergoing more than $33 million in renovation, according to previous Journal reports.

Centennial also converted the Chronicle Building, which is located at 826 W. Sprague and once housed the Spokane Daily Chronicle newspaper, into apartment units, with the overall project creating eight living units a floor on the third through sixth floors of the seven-story structure.

Centennial Properties is a subsidiary of Cowles Co., which also owns the Journal of Business.

At the James S. Black Building, NAI Black’s move marks the end to a 46-year presence there.

“I’ve been in that building my entire career, so it’s a big move for us,” he says. “I’ll probably be in the (SRBC Building) for the rest of my career.”

The SRBC Building will be renamed the Greater Spokane Inc. Building before the end of the year, he says.

Mielke says GSI works closely with real estate agents to find available space for new and expanding businesses within the Spokane area, so having NAI Black move in above GSI is beneficial.

“It just makes it that much closer, and we’re going to continue to forge our relationship with the commercial real estate community,” he says.

With NAI Black’s move, the SRBC is fully occupied.