On The Lookout for handmade quality 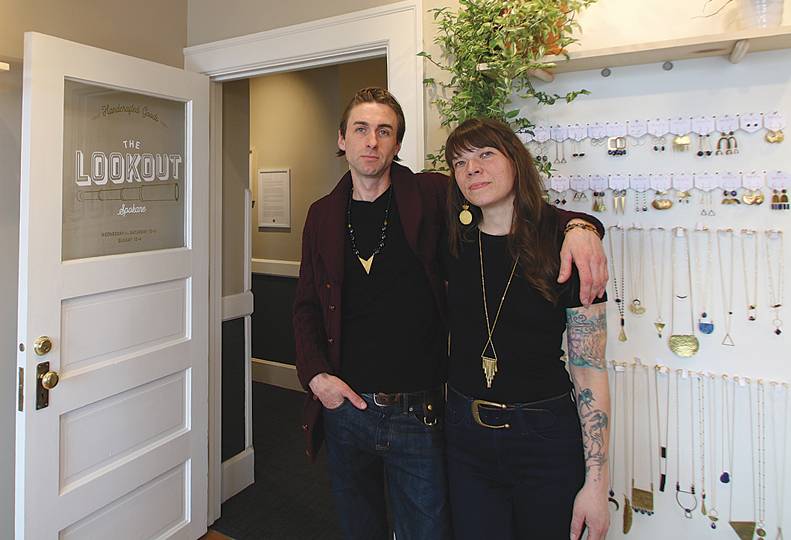 -Alla Drokina
Alexander Ekins and Amy Dolomont started The Lookout in Browne’s Addition after discovering the space earlier this year.

The Lookout, a hand-crafted goods boutique, has opened its doors in a small space tucked in the top floor of the two-story, century-old former home on the edge of Spokane’s Browne’s Addition neighborhood.

Lookout Spokane LLC co-owners and partners Amy Dolomont and Alexander Ekins aren’t novices to the business world as they both met while working on a farm before owning and operating Ace of Spades Farm, a gourmet vegetable farm. Amy also owns and handmakes Aquila, the jewelry line, sold at Lookout.

“The name Lookout is both emblematic of the fact that we’re always looking for amazing products, but also you have this amazing lookout,” Ekins says, referring to the view from the windows and the 150-square-foot patio featuring views of the Monroe Street Bridge with the Spokane Falls underneath it, the Spokane County Courthouse north of the city center, and Mount Spokane far off on the horizon.

“We’re having fun playing with that. It’s sort of tongue-in-cheek, but fits the mark of the space and intention of what we’re doing here,” he says.

The shop’s neighbors in the building, at 1516 W. Riverside, include Ladder Coffee & Toast and Glorious Artisan Bakery.

Dolomont stumbled upon the space in late January while grabbing coffee at Ladder and was immediately drawn to it. Within a month after contacting the owner of the building, Sheldon Jackson, she and Ekins contacted vendors and opened the shop.

“This building is really getting a second life,” Ekins says.

Dolomont and Ekins say that they spent around $3,000 to get the shop running, which includes inventory and fixturing costs.

“We believe in lean manufacturing and lean business principles, so in every single business we operate, we are ruthless in terms of waste … we just don’t fool around,” Ekins says.

Although Ekins and Dolomont declined to disclose revenue, when interviewed on the 10th day since their business opening, they said the shop had already been profitable.

In the summer, they plan to decorate the patio in bright yellow 1960s furniture and have flower and clothes pop up shops.

At 330 square feet, the space is compact, but Dolomont and Ekins pride themselves on using it efficiently. Although the shop features items from at least eight local vendors and 20 national vendors, they take care that nothing appears cluttered.

Dolomont designed each of the white display boards that the jewelry is exhibited upon. The pegs and the shelves were created to be modular, so the shelving could be moved around to accommodate merchandise.

“Everything was very intentional and designed for space,” Ekins says.

Dolomont was previously a visual director for the retailer Bon Marche before it closed down. Her eye for space and design is seen throughout the shop.

Among the shelves laden with goods, there are handmade candles priced at $30 for an 11-ounce size and $16 for a six-ounce size by Inland Candle Co., of Hayden, to colorful, clay earrings by Spokane-based Ishi Studio priced at $22. The shop also features various mugs and tumblers from Spokane vendor 2232 Ceramics, ranging between $20 to $32.

Moon River Naturals, a company run by a couple from Hawkins, Texas, has natural skincare products.

Ekins says that there aren’t many men’s products on the market that can boast of natural ingredients like Crux Supply Co. This Pennsylvania-based vendor of what are considered cruelty-free products offers grooming items such as the $16 tea tree toner and styling pomade at $14 made with ingredients including bergamot and rosewood scents, beeswax, coconut oil, and jojoba oil.

Dolomont and Ekins say they’re careful and selective about what they sell in the shop.

The unifying factor between all the vendors is the passion that these business owners exhibit, Ekins asserts.

“This person loves what they do, puts their heart and soul into it,” he says “They’re all trying to make their way as independent business owners.”

Nonlocal vendors include Hardmill LLC, of Seattle, which supplies aprons and totes with hand-pounded rivets priced from $110 to $140.

Ekins sees beyond the item on the shelf, saying that he can picture the apron being passed down to someone’s child and eventually becoming a prized family heirloom.

“It’s the subtle details you start to look for, and that you really start to understand,” Ekins said.

Dolomont, who has been making jewelry for a decade, has sold to Anthropologie and participated in regional craft art fairs. She sources the brass for her jewelry from Turkey and her gemstones from all over the world. Dolomont works from her home office.

Her goal is to create affordable pieces that can feel special for the wearer.

“When you wear something you love … you build a relationship with the object,” Dolomont says.

Dolomont says she’s drawn to patterns she sees in nature, such as rock formations or trees, or on fashion runways. Her experience hand making jewelry has given her an appreciation for others who are makers.

“We have just developed a fond admiration for things that are handmade, and so the idea behind this story is just to use our love for everything handmade and apply it to the makers of different trades,” Ekins says.

Ekins and Dolomont have conversations with vendors about their items to determine whether they can be a good fit as a vendor for the shop.

They stress they won’t just accept any local vendor. Quality and local isn’t always synonymous, they say. A product may be aesthetically appealing, but if the materials won’t last, they have to turn it down.

“While we love supporting local makers, our focus remains to showcase the very best handmade products from around the country,” Dolomont says.