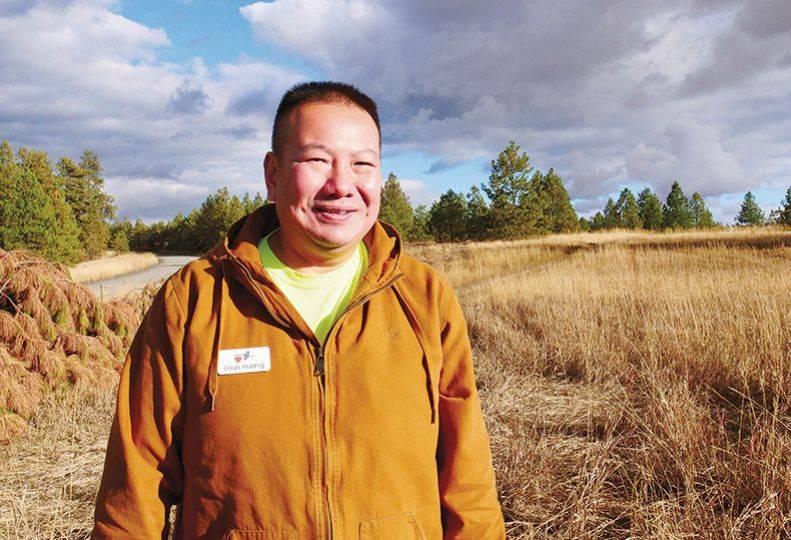 -—Erica Bullock
Louis Huang, president of the Spokane Gun Club, stands on the proposed site for the organization’s new range.

In the latest chapter in its bid to find a new home, Spokane Gun Club has entered into an option to buy more than 160 acres of land on the West Plains, says club president Louis Huang.

Located at the southeast corner of Deno and Rambo roads, the proposed site would be an alternative to land the club owns near the northwest corner of Thorpe and Brook roads. Its proposed development there has been ensnared in a protracted legal dispute with the Medical Lake Cemetary Association, which owns neighboring property.

Huang says the new piece of land, which is about 2 1/2 miles northeast of Fairchild Air Force Base, is a promising option to fulfill his top priority of bringing members back together.

“Older members deserve to use the club again,” says Huang, noting the average club member is 65 years old. “For the vast majority of our members, it’s a very big social interaction for them. When we closed down in Greenacres, some literally stopped shooting because they didn’t think we’d ever reopen. So, the absolute first priority is to get our members shooting again, together.”

The last registered shoot hosted by the club was 18 months ago, Huang says, adding, “We’ve all scattered since we’ve been closed down, which was a few months before Ridgeline High School opened up.”

As previously reported in the Journal, Central Valley School District purchased the 99-acre property encompassing the club’s longtime trap and skeet range at 19615 E. Sprague in 2018 for $8 million. A lease agreement with the school district allowed the gun club to use the property for $10 a month until July 1, 2021.

A year after gun club members voted to sell the property to the school district, in 2019, the club purchased 450 acres of land west of Fairchild Air Force Base for $920,000, from Oregon-based Western Pacific Timber LLC. However, plans to develop the property into a new clubhouse and shooting range were halted due to the cemetery association’s lawsuit challenging the club’s conditional-use permit.

In April, the Journal reported that the Medical Lake Cemetery Association appealed the Spokane County Hearing Examiner’s decision approving the gun club’s conditional-use permit at the Medical Lake property to the Pend Orielle County Superior Court. That court, which heard the case to avoid potential conflicts of interest in Spokane County, overturned the hearing examiner, leaving the club to look elsewhere for a new range or pursue further legal action.

At the recently secured site at Rambo and Deno roads, a feasibility study is ongoing that will provide data about a drainage area that’s considered a wetland on a portion of the land. The study also will involve reviewing acoustics at the property and providing a geotechnical report, which will help determine how the land can be used, says Huang.

He says the club also is talking with Fairchild Air Force Base officials to determine any limitations the base may have on club activities.

“We have to complete all of our studies by next summer, and by that point, we either have to buy the property or move on,” Huang says.

Spokane Gun Club board member William Korfhage says the results of the feasibility study could be available by the end of this year or early in 2023. Spokane Gun Club members then will vote on whether to buy the land.

The current landowners have agreed to wait until July for the club’s purchase decision, which allows time for the feasibility study, the member vote, and a determination about whether the property will be granted a conditional-use permit for the club activities.

After a decision is made about the Deno Road property, members will evaluate what to do with its 450-acre Medical Lake parcel.

Huang says there are many possibilities for how the Medical Lake property can be used. He says for the right price, the club may sell the land, or keep it and use the land for other club purposes.

“When we sold the old club, the notion was that we were selling that club with the authorization to build another club. The entanglement is we bought a piece of property that’s tied up in litigation,” Huang explains. “We’re taking a little bit more money out of the bank than was anticipated but that’s with the caveat that if we bought this land (on Deno Road), we could sell the (Medical Lake) land. We want to make sure the membership is comfortable with that. We’re not just becoming land barons.”

Lifetime members, active annual members with three years of consecutive paid dues, and annual active board members will be allowed to vote on whether to make the new land purchase.

There are about 300 lifetime members and over 100 active members, Korfhage says. Of the 400 members, only about 45 regularly attend quarterly meetings, but the vote to purchase the Deno Road property is expected to draw a larger crowd.

If the gun club can secure the land on Deno Road for a new home, the next priority will be to construct a range that will accommodate future goals and potential partnerships, Huang says.

He says the club intends to work with Wolfe Architectural Group PS, of Spokane, to modify the plans the Spokane-based architecture company created for the Medical Lake site.

“Our original plans, we believe can be modified for the new piece of land,” Huang says. “We want to do a phased construction. Phase one is to get our members shooting. Two is to get to the point where we can be a substantive range for all the operations we want to do.”

The land search was mostly focused on the West Plains because a gun range is only allowed to be located on one type of land designated as “rural traditional,” Huang explains.

He says being located on the West Plains should cause fewer noise concerns regarding shooting due to the noise already being generated by aircraft using Fairchild Air Force Base and Spokane International Airport.

At the site, the range would stretch from east to west, with shooting to the north. He says the range likely will be sited 200 feet north of the southern property boundary.

There’s an internal debate between members about what facilities to construct. Members have proposed continuing as a trap club, although interest in trap shooting has been declining for years nationwide, explains Huang.

“In our region of the country, trap shooting is on a decline, and a lot of people don’t want to admit that,” Huang says.

A storage building will be the first structure on site, and Huang says the space will be used as a temporary meeting space for members until a dedicated clubhouse can be constructed.

“Everyone is curious what we’re going to build. It will be heavily advertised once we get to that phase of construction,” he says. “The first year will probably be crazy with people coming out to see what we’ve built.”

While Huang says that maintaining membership has been a chronic problem, he adds that a new home for the gun club would help to renew interest in the sport and club membership also could benefit.

“When Central Valley School District bought us out, they actually did us a favor because we were financially insolvent at the time,” he says. “We want a gun club that can sustain itself.”

Huang says a Seattle group of Olympic bunker shooters has reached out to Spokane Gun Club looking to partner with the club for a semipermanent home. The bunker team has offered to fund a $250,000 project to build an Olympic bunker on the new land.

“Olympic bunker is a game as slow as golf. There’s a lot of stations that move at a very slow pace and that’s one of the novelties we’re hoping to bring—one more shooting discipline and also some Olympic shooters to this area,” he explains. “It would do nothing but add economically to the area.”

Huang says the Spokane Gun Club is listed as a 501(c)(7), which he describes as a social club with nonprofit status. “But it doesn’t preclude us from having an operation that is profitable,” he adds.

Another challenge for the club to consider is the age gap between younger and older shooters with a large number of middle-aged members absent due to time and expenses relating to family life.

“Most people come out and shoot on an average day somewhere between two and four rounds of trap,” he says. “That can take anywhere from as little as 10 to 15 minutes to as long as 30 to 45 minutes. Most people are here for a couple of hours because they socialize.”

Huang says there are many possibilities to add members in the future. Plans at the range could include shooter and hunter safety programs for youth.

He also says there’s an opportunity for a partnership with clubs and other groups to use the range for meetings or fundraising events.

Huang says, “The majority of those in the trap-shooting community would like to see us come back strong. Overall, we want to create something that’s going to be good for the community.”