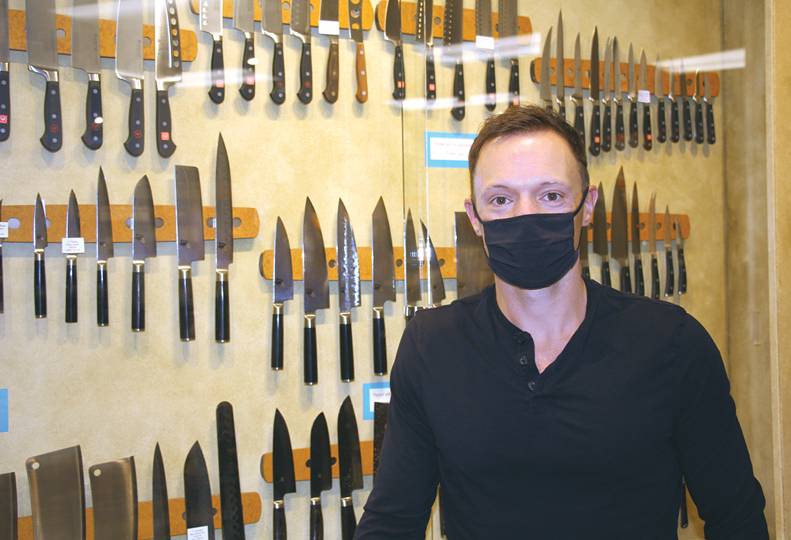 -Kevin Blocker
The Kitchen Engine co-owner Eric Frickle says the company hopes to open in its expanded space before Thanksgiving.

Eric Frickle, co-owner of cookware and cutlery store The Kitchen Engine, says he hopes to begin expansion on a full kitchen to increase space for culinary classes offered there.

Frickle says he would like to see construction start this month at the space in the Flour Mill shopping center, on the north bank of the Spokane River at 621 E. Mallon. He hopes the expansion will be completed before Thanksgiving, as the holiday season is customarily the retail store’s busiest time of the year.

“We want to provide a big-table sort of feel, though maintaining an intimate feel,” says Frickle.

The Kitchen Engine, which Frickle and his parents Dan and Vicky Frickle founded in 2006, celebrates its 15th anniversary this month.

Alicia Barbieri and Stephen Barbieri, of Goodale Barbieri Co., represented the Frickles in securing the expanded space, which most recently served as home to the Chocolate Apothecary.

In addition to the culinary kitchen, which Frickle says will accommodate 16 to 20 people per class session, a café will be built that will offer coffee, tea, beer, and wine, he says.

“Espresso, cold brew, and 50 to 60 different teas will be available,” he says. “Instead of just offering in bulk, we want to give customers a single-cup option while they shop.”

The café will offer a limited lunch menu with small items in addition to outdoor seating on the west side of the Flour Mill, he says.

The Kitchen Engine currently has seven employees, and Frickle plans to hire at least two baristas for the café. He plans to hire additional assistants for the cooking classes but doesn’t have a sense for just how many he’ll need yet.

“We really decided to move forward with (the expansion) in January and signed the lease in April,” Frickle says.

Plans also are in the works to expand the cutlery department into another vacant retail space that once housed a jewelry store, which has moved to a lower-level suite in the Flour Mill (see more below), he says.

“It will increase four to five times the amount of cutlery we sell now,” he says. “In general, department stores have gotten away from selling cutlery.”

He acknowledges the moves are ambitious, and he still experiences periodic bouts of heartburn when thinking about all the business moves being made.

“Especially when I ask myself, ‘Where’s retail headed?’ Sometimes it feels like a race to zero,” he says.

He points to online retail growth, which has been accelerated by COVID-19, as a perpetual source of stress for a brick-and-mortar operation.

“It was terrifying pulling the trigger on this,” he says.