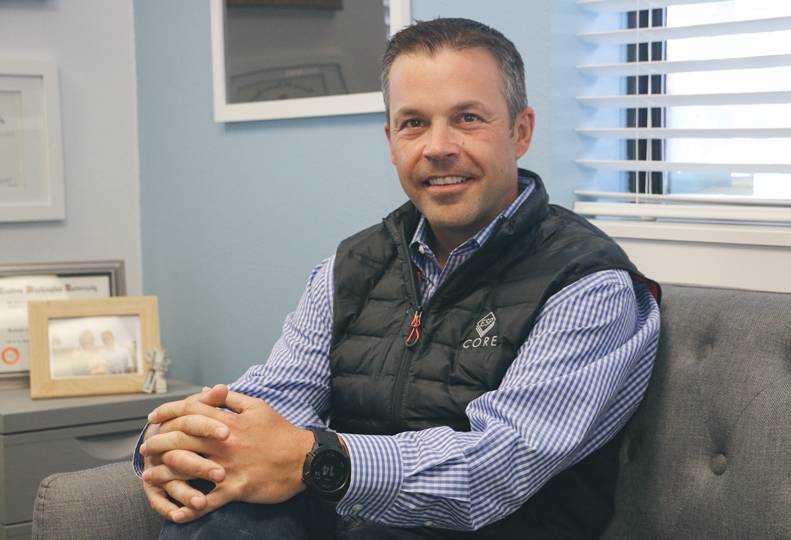 -VIRGINIA THOMAS
Shaun Murray, CEO of Enhanced Software Products Inc., says the company works with 50 credit unions in 16 states, but it just added a Spokane-area client for the first time in 20 years.

A Spokane Valley software company that caters to credit unions is returning to its roots with the addition of a Spokane client, after almost two decades without a customer in its home market.

ESP’s bread and butter is core processing. Core processing is a back-end system that processes everyday transactions and posts updates to accounts and institution databases.

“We essentially process all of those core transactions, and we house the data for credit unions so they can focus on other things, like their members,” Murray says.

ESP has six clients in Washington, but none in the Spokane area. Murray says ESP works with all sizes of credit unions, with a sweet spot of credit unions that have between 2,000 and 30,000 members.

The company worked with credit unions in Spokane until about 20 years ago, when he says the market shifted and its local customers switched to a different model.

Murray says controlled growth is ESP’s ultimate goal. He says the company is currently growing at an annual rate of about 20%, adding no more than five credit unions per year.

“That’s to make sure that our current clients are taken care of,” Murray says.

ESP has also been growing its workforce. Murray says he’s hired three new employees in the past month, bringing the total employee count to 32. He says the average employee stays with the company for 10 years.

“We try to create an atmosphere of open conversation--try new things, and now that, within reason, you’re never going to be negatively affected by trying,” Murray says.

Murray says he found that the credit union had a similar mindset toward open communication.

Avista Corp. Credit Union, located in Avista Corp.’s corporate headquarters building at 1411 E. Mission, serves 3,900 members, all of whom either work for Avista or its subsidiaries, or are children of an Avista employee.

“They went through a very rigorous due-diligence process, which was admirable and nice to see, because they’re going into a long-term agreement with their most important vendor,” Murray says. “Through that process, what we found was their vision and the way they do business, their attention to detail, (and) their expectations are not only clearly defined but they’re very much in line with ours.”

In a press release announcing the relationship, assistant manager of Avista Corp. Credit Union Chris Jentges says proximity was low on the list of factors when considering becoming an ESP client.

“We were looking for a partner that met our core values,” Jentges says. “Even if they were halfway across the country, we’d get the same kind of service.”

Murray says that ESP found working with Avista Corp. Credit Union during the discovery phase to be easy.

“I place a high emphasis on communicating, and communicating regularly and openly,” Murray says. “They are very much the same way. We never have to wonder where they’re at. That’s not something you see every day.”

The company started in 1996 in Spokane Valley after Kathy Murray took over an arm of a national financial services tech company. At the time, ESP used a software called Shared Vision. Toward the end of that decade, ESP decided to rebuild its software platform from the ground up and launched the new platform in the early 2000s.

Murray says ESP is currently in the beginning stages of doing that again, with its current software, called Forza.

“We’re looking to redo or rewrite some of our core functionality, which will be a big project and carry us well into the future,” Murray says.

The overhaul is in its earliest stages, but Murray says ESP is looking to improve the efficiency of communication between itself and its customers, and is considering moving its software platform online.

“There’s not a lot of details yet, but we’re investing a lot of money and time and manpower to make sure that we’re at a level where we can compete with the largest competitors in our space,” Murray says.

As ESP grows, Murray says one of the biggest challenges the company faces is an abundance of choice. New companies enter the financial technology realm frequently, he says, and it’s a challenge to keep up on the latest apps and services fintech companies offer. Choosing which companies to partner with can be difficult.

“It used to be that with payment apps, for example, PayPal might have been the only one -- now there’s like 20,” Murray says.

ESP works with 75 partner companies, which provide services such as electronic signatures. By picking which services they want to use through ESP, Murray says credit unions can customize their financial institution for their needs and customers.

“For example, with e-signatures through a company like DocuSign … the credit union can offer those services to the member regardless of size, which allows the credit union, big or small, to act like a very big (credit union), with the same solution set.”