Workers to come from unemployed, employed, throughout region 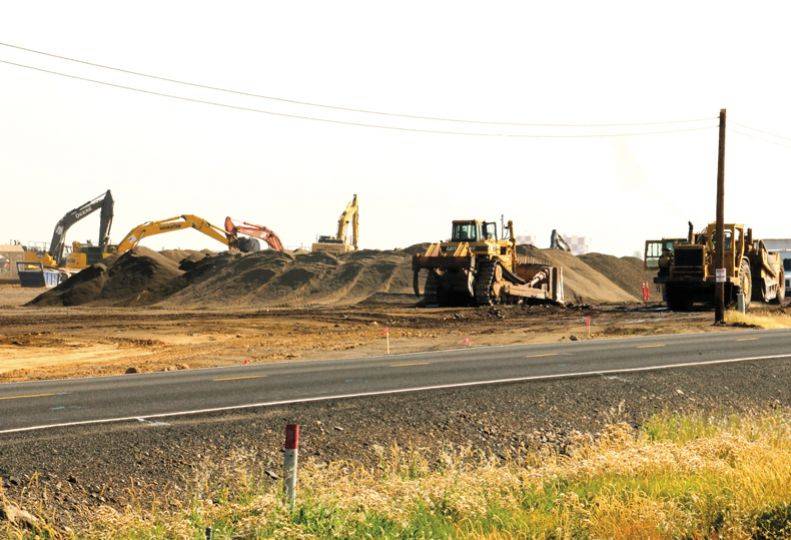 Before the 2019 holiday rush, Amazon.com Inc. hopes to have nearly all 1,500 positions filled at the massive fulfillment center under construction on the West Plains, says company spokesperson Lauren Lynch.

Amazon will begin hiring a few weeks before the facility opens next year, but Lynch says hiring will still continue once the fulfillment center has opened. Hiring plans are all preliminary, she says.

“I can tell you that when Amazon starts hiring for the fulfillment center in Spokane, we’re going to be hiring for 1,500 from the starting gate,” she says.

The hiring process will include online applications and in-person interviews before candidates will be given hiring dates, she says, adding Amazon will advertise and reach out to local media when it’s ready to begin hiring.

Amazon expects to open the facility before the 2019 holiday season to accommodate peak demand at that time of year, says Lynch.

According to planning documents on  file with Spokane County, construction is scheduled to be completed by Aug. 31, 2019.

Amazon might draw employees from people already working here, but the company might also hire people who aren’t working or people who live outside of Spokane County, employment and labor and economic observers here say.

If Amazon’s pay and perks are better than the area average, it might be easy to fill those jobs, Qualley says.

That could cause other employers to compete with higher wages, he asserts.

Although Lynch doesn’t know pay rates for the Spokane fulfillment center yet, she says Amazon wants wages to be competitive. Pay can vary depending on experience, position, or shift. Amazon also has a pay increase program, she says, which provides employees the opportunity for a wage raise every few months. All 1,500 positions will offer health, retirement plan, and education-assistance benefits starting on the first day.

As of July 27, Amazon had 133 open fulfillment center jobs listed on www.amazon.jobs. One Seattle-based position, titled Amazon warehouse fulfillment associate, starts at a minimum of $13.25 per hour. Two other positions in Seattle, both titled part-time pickup associates, were listed with pay rates of $14.25 and $15.25, respectively.

“If this comes on and we’re still in a pretty a strong labor market … it’s going to continue to tighten that labor market. For existing companies, it’s probably going to get a little bit harder to hire qualified workers, and maybe some businesses might even lose workers who attempt or try to shift to Amazon facilities,” says Forsyth. “I’d say overall, it’s definitely going to tighten the regional labor market even more.”

How much the market might tighten could depend on how many fulfillment center employees will come from outside of Spokane, he says.

Within a 40-mile radius of Amazon’s planned facility, 20,000 people are unemployed, says Tweedy.

In short, Amazon can look farther than Spokane County for labor; people in other areas in Eastern Washington and northern Idaho can claim those positions as well, he says.

Patrick Jones, executive director of the Institute for Public Policy and Economy with EWU, agrees that Spokane’s labor force can handle the additional jobs. Compared to the size of the region’s workforce 1,500 positions to fill is “relatively small.”

In addition to a total labor force of roughly 240,000 employed people in Spokane in 2017, Whitman, Stevens, and Kootenai counties could add roughly between 80,000 and 90,000 people to the potential labor pool, he asserts.

Also, some people could leave their existing jobs and join Amazon.

Forsyth, Jones, and Tweedy say it’s difficult to gauge employee movement without knowing how much Amazon plans to pay its employees.

Tweedy says, “The movement between companies, when we don’t know what the wage will be, (is) a real hard question to answer, but I certainly think the majority of (fulfillment center employees) will be coming from those people unemployed and people willing to move to Spokane for Amazon.”

Lynch says most workers to be hired at the fulfillment center will pick, pack, and ship orders, although jobs also will include engineers, managers, and other positions. To qualify, people must be able to work in the U.S. legally and be at least 18 years old. Different positions require different education levels.

The economists say Amazon, as an employer, will bring economic benefits to the region.

Forsyth says new jobs tend to help with household formation in the long term. Plus, there could be a larger tax base, so governments might be able to collect more taxes without raising rates, he says.

Jones adds, “Just having such a high-profile company putting roots into our community is going to, I think, pay dividends down the road for business recruitment.”

“We would like a good mix of industries and occupations, and this adds to that mix. Spokane is the largest job base between Seattle and Minneapolis. We’re a regional hub. People will come to Spokane for jobs,” he says.

Lynch says Amazon has received “great feedback” from areas in which the company has opened fulfillment centers.

“It’s more than just 1,500 jobs that we announce whenever we open the fulfillment center,” she says.

For example, building the center requires construction workers, and other workers are needed to keep it functioning. Amazon often installs solar panels and uses small businesses for services such catering, creating T-shirts and banners, or snow removal, she says.