Spokane-area locations sell more fuel, food than those in other markets, one company reports 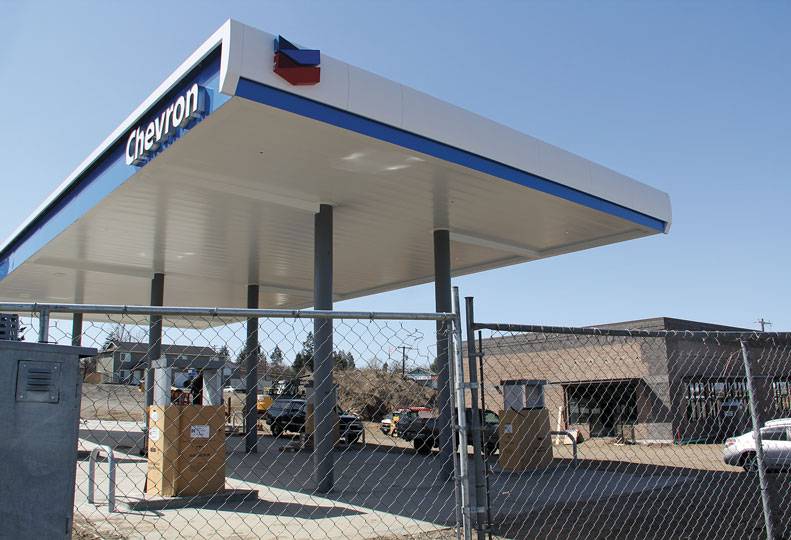 -Virginia Thomas
Khinda Properties LLC is developing a new convenience store, to be called Sammy’s Pit Stop, at 102 S. Thierman, in Spokane Valley. The project is one of a number like it underway in the region.

“I think in the last 18 months to two years, there’s been a huge increase,” Redmon says.

Divine Corp. operates 14 convenience stores in the Spokane area and is building a 15th at the southeast corner of 57th Avenue and Palouse Highway, in the Moran Prairie neighborhood south of Spokane.

It’s one of a handful of convenience stores and gas stations planned or currently under construction throughout the Spokane area, according to building permits filed with the cities of Spokane and Spokane Valley, as well as with the county.

“It’s one of the few markets that we’ve designated as being a growth market for us,” Hobson says. “A lot of that is based on population and population growth.”

Since 2000, Spokane County’s population has grown by about 10% each decade, according to U.S. Census Bureau data.

Divine Corp. is also on the lookout for opportunities for new stores, Redmon says.

“We’re in the midst of looking at a couple of sites that we’ll announce in the next month or two,” Redmon says. “We’re definitely looking for growth.”

Divine Corp. was started in 1956 as an auto repair and towing shop—services it still offers—and added convenience stores in the early ‘90s, Redmon says.

Redmon says companies like Maverik tend to build larger, more expensive convenience stores. It’s harder for local chains to keep up with national companies that have moved into the market, he says.

“We’ve spent a ton of money in remodeling the inside of our stores,” Redmon says. “Our feeling is that we’re one of the last large local chains here in town. Obviously, the companies that have elected to come to town feel like they can get their market share.”

Redmon says he’s been worried about an oversaturation of Spokane’s convenience store market for years. However, demand and supply seem to be roughly even.

“It just seems like Spokane’s growth is eating it up,” he says.

Hobson says Maverik originally came to the Spokane market partly due to the high volume of fuel sales in the area.

“We’ve noticed that people like to drive around in that market,” Hobson says. “We sell a lot of fuel there.”

Maverik’s proprietary hot food brand, Bonfire Grill, is also popular at its convenience stores in the Spokane area, he says.

“We sell a lot of burritos every single day,” Hobson says. “Breakfast and lunch items sell incredibly well in that market.”

Hobson says that as some cities in the intermountain west grow, Maverik sees opportunities to enter into new markets.

“The West is seeing a boom in population,” he says. “Any time we see an area where we feel like a population is being underserved as far as their fueling and convenience needs, we like to jump into those markets.”

In addition to a store planned at 6719 N. Division, Maverik has filed building permits for a convenience store and gas station at 2020 N. Pines, in Spokane Valley.

Also in Spokane Valley, a Chevron gas station and convenience store are going up at 102 S. Thierman Road. Documents filed with the city show that Spokane Valley-based Khinda Properties LLC is building a convenience store and gas station, to be called Sammy’s Pit Stop. The 10,100-square-foot store and 1,500-square foot fuel canopy are valued at $1.1 million, permits show. Khinda Properties is listed as the general contractor, while downtown Spokane-based Uptic Studios Inc. is listed as the project architect.

As reported by industry publication Convenience Store News, Par Pacific bought 33 Cenex Zip Trip convenience stores in the Spokane area from CHS for $70 million, plus the value of inventory in 2018.

The acquisition gave Par Pacific a presence in the eastern Washington and northwest Idaho markets, expanding the footprint of Nom Nom convenience stores outside of Hawaii, where the brand currently has 34 total stores on three islands.

Nom Nom currently has 13 stores in Spokane and five in Spokane Valley, according to the company’s website.