Despite economic headwinds, Spokane saw its share of major transactions, other developments 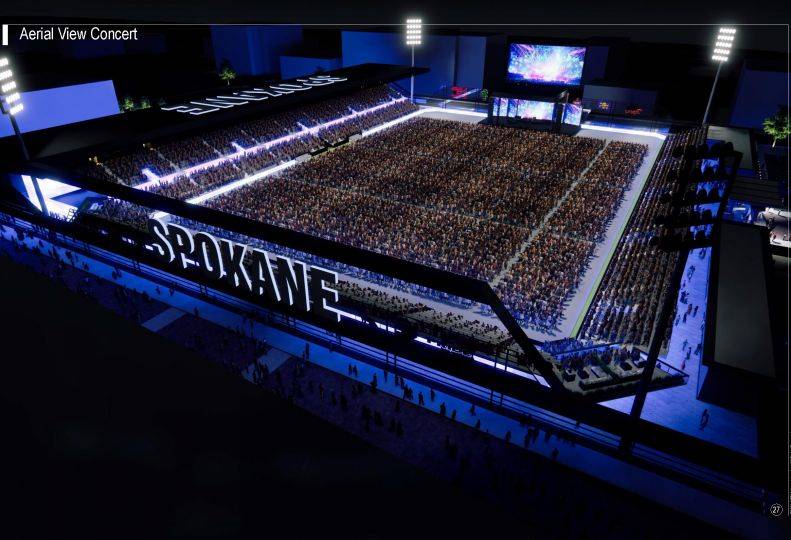 ---
Plans to build a new stadium north of downtown Spokane became one of the biggest business stories of 2021.

Labor shortages, supply-chain restraints, and inflation dominated water-cooler conversations. Or they would have, if waves of COVID-19 didn’t prevent many companies from bringing their employees back to their offices. Those that did return to the conventional workplace often advocated for social distancing, complicating further close-quarters conversations around the water cooler or elsewhere.

Working from home remained commonplace, as talk of a post-pandemic economy proved to be premature.

Barring some big news in the next couple of days, here are the top 25 business stories of 2021, in chronological order.

U.S. Bankruptcy Court trusts issued what are believed to be the final payments to investors who lost millions of dollars when Spokane-based Metropolitan Mortgage & Securities Co. and Summit Securities Inc. shut down nearly two decades ago. In all, investors recuperated nearly $160 million in total from the trusts, but that represents less than a third of the claims filed in the two companies’ bankruptcies.

In mid-January, the city of Spokane Valley disclosed plans for a two-story, $10 million addition to the Spokane County Fair & Expo Center. The proposed expansion would enable the venue to host larger events and potentially increase retail and tourism activity.

Denver-based Mercer Global Advisors Inc. acquired Hart Capital Management Inc. The Spokane-based financial advisory company was founded by Craig Hart in 1998 and was regarded as the second-largest company in the region, in terms of assets under management, at the time of the acquisition.

In mid-February, a development team that includes companies in Boise and Portland disclosed plans for a $35 million apartment complex at the northwest corner of Riverside Avenue and Browne Street, on the western edge of Spokane’s University District. A month later, a Phoenix company announced it was moving forward with a $45 million housing project at the east end of the U District. They joined the $20 million Boxcar Apartments project that’s well underway on the district’s southern edge.

In early March, just weeks before Spokane Public Schools planned to start construction of a new stadium at the old Joe Albi Stadium site in northwest Spokane, the Downtown Spokane Partnership and other supporters began advocating for the stadium to be built just east of the Spokane Arena. In the late spring, the school board agreed to build the 5,000-plus-seat venue at the new site, which was followed by an agreement with the Spokane Public Facilities District to manage the facility and a commitment from the United Soccer League to launch expansion teams there. Groundbreaking on the $30 million-plus facility occurred in late November.

Mullen shifts focus to the South

Mullen Automotive Inc., the California-based electric-vehicle startup, announced in mid-March plans to open a large manufacturing facility in Memphis, Tennessee, similar to a facility it had agreed to build on the West Plains previously. The company didn’t shut the door completely on developing a facility here at that time, but it walked back its previously announced plans, saying it was waiting to see what incentives it could get from Washington state. In November, Mullen announced plans to expand a manufacturing facility it bought in Robinsonville, Mississippi, about 40 miles south of Memphis.

The Spokane Association of Realtors released a report in mid-April that showed the housing market was underbuilt by nearly 32,000 living units in the 2010s. The reports suggests the lack of available inventory is a contributing factor to the surge in median home selling price, which increased to $341,000 early this year from $179,000 in 2016.

Duane Hagadone, the Coeur d’Alene businessman credited with turning the lakeside city into a tourism destination, died on April 24 at the age of 88. In addition to the Coeur d’Alene Resort, the Hagadone companies own 16 newspapers and a number of additional enterprises.

In early May, the Kalispel Tribe of Indians offered to buy the Spokane County Raceway park from the county for $4.75 million. The following month, the county commissioners agreed to sell the facility, located just north of the tribe's Northern Quest Resort & Casino, for $6.1 million.

Longtime developer John Stone and his partners disclosed plans to build one final project in the Riverstone urban village, in Coeur d’Alene. The mixed-use building is being constructed on the last lot owned by Riverstone Holdings Inc. in the 160-acre development, which Stone began developing in the late 1990s.

Developer Jerry Dicker acquired the historic downtown Steam Plant complex from Avista Corp. The transaction included the Steam Plant Square, the Seehorn-Lange building, and a neighboring parking lot. The complex is near other Dicker-owned properties, including Hotel Ruby and Bing Crosby Theater.

Spokane entrepreneur Jordan Allen founded Ruumr Inc. as a real estate auction service, just one year after shuttering a vacation rental company Stay Alfred in what was considered the first high-profile casualty of the COVID-19 pandemic. Late this year, Ruumr had changed its name to Doorsey Inc. and had raised $4.1 million in capital, with plans to move beyond its beta phase.

Spokane businessman John J. Hemmingson bought the 386,000-square-foot Triumph Composite Systems Inc. plant and 50-acre site in West Plains, with visions of developing a manufacturing hub there. Triumph now occupies about a third of the complex and plans to move out within two years.

Large employers reported that executive-level diversity positions are growing in prominence and scope in the Spokane area. While many organizations have had positions focused on diversity, equity, and inclusion in the past, the elevation of such positions to the C-suite is a relatively new development, observers said.

Parrots Inc., a medical artificial-intelligence startup, moved to Spokane from Seattle and forged a relationship with Washington State University’s Steve Gleason Institute for Neuroscience. This fall, Parrots founder David Hojah was named Entrepreneur of the Year by the Association of Washington Business.

A trio of former Itron Inc. employees launched Treasury4 Inc., a software company aimed at serving large organizations. In August, the company closed on $3.4 million in financing and reported it expects to begin generating revenue in the coming months.

Tribes get nod for sports gambling

The U.S. Department of Interior approved sports gambling compacts in September for several Native American tribes in Washington state, including the Spokane Tribe of Indians and the Kalispel Tribe of Indians. The Kalispels opened the Turf Club Sports Book at its Northern Quest Resort & Casino in early December, and the Spokanes plan to open a sportsbook area in the expanded portion of its Spokane Tribe Casino soon.

Site work started on a large fulfillment center near the big Amazon Fulfillment Center, on the West Plains. As of publication, Amazon hadn’t confirmed the project, dubbed Project Grey in public records, though it has several characteristics similar to other projects completed by the megaretailer in the Spokane area. Amazon already operates five facilities in the region and employs more than 3,000 people.

Spokane Valley Summer Theatre launched a capital campaign for an envisioned $36 million Spokane Valley Performing Arts Center, in the Mirabeau Park area of the Valley. The organization has raised about a third of the funds it needs to build the venue and hopes to break ground on it in September 2022.

Walt and Karen Worthy agreed to sell the five-property, 1,800-guestroom Davenport Hotels collection to KSL Capital Partners LLC, of Denver. The Worthys are reportedly retiring, but longtime employee Lynnelle Caudill is expected to stay on as managing director, through a new partnership with Atlanta-based Davidson Hospitality Group.

Centennial Real Estate Investments, the real estate division of Cowles Co., plans to demolish the Chancery Building, in downtown Spokane, and build an apartment building there. Work on the project is expected to begin in late 2022 and will take 12 to 18 months to complete.